Hewitt given tough opener at Wimbledon

The release of the Wimbledon draws on Friday has dished up some tough tasks for Aussies, including Lleyton Hewitt's first round battle with Jo-Wilfried Tsonga. 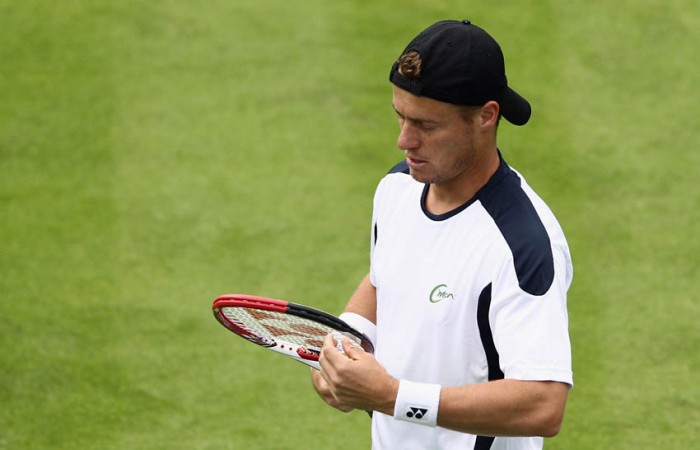 While 20th-seeded countryman Bernard Tomic and world No.5 Samantha Stosur are favoured to win their openers, Hewitt will be a rank outsider to knock over Tsonga, who last year at Wimbledon became the first man in history to defeat Roger Federer from two sets down at a major.

Hewitt has played just two competitive matches since undergoing toe surgery in February but would have given himself a chance of a decent grasscourt run with a helpful draw.

Alas, his incredible record of striking the world’s premier players in the opening round at the majors continues.

Tomic believes the outlook for Australia’s nine-strong contingent remains good despite a less-than-ideal build-up for the country’s three best hopes. Tomic, a quarterfinalist last year as a qualifier, Hewitt and Stosur were unable to win a match in their grasscourt tune-up events.

Compounding concerns, Tomic is also in a fitness battle after being struck down by an untimely virus that robbed him of vital conditioning and court time ahead of his assault on the greatest prize in tennis.

Rather than dwell on what might have been, the teenage ace is putting a positive spin on proceedings.

“Sam lost, and Lleyton, and I was a bit sick in Halle,” Tomic said after his 4-6 6-3 7-5 loss to Italian claycourter Fabio Fognini at Eastbourne on Wednesday.

“But in one way it could be good that you’re getting that before a major.

“You want to play well before the four majors but, if you play bad, also it’s a sign of something to work on before the actual major starts and that’s the important bit.

“So we’ll see … this is where it started for me. This tournament made my tennis, made me into the top 100, and I’ll always look back to it as that.

“When Monday or Tuesday comes, I’ll be ready … I’m feeling like I can do well again.”

Hewitt lost his only competitive grasscourt outing at Queen’s to towering Ivo Karlovic, the Croatian who unexpectedly eliminated Australia’s defending champion at the All England club nine years ago.

Stosur, the reigning US Open champion, has modest expectations after nine years of poor returns on the London lawns, but is entering the tournament with a nothing-to-lose approach following her first-round losses in 2010 and 2011.

Matosevic, a quarterfinalist this week in Eastbourne, takes on Xavier Malisse of Belgium in his first round match, and Ebden has been drawn to face Frenchman Benoit Paire.

Rodionova is the Australian with the toughest draw of the lot, scheduled to play reigning French Open champion and world No.1 Maria Sharapova.