Nalbandian, Cilic through to Queens decider

Former Wimbledon runner-up David Nalbandian will face Croatia's Marin Cilic in the final of the Wimbledon tune-up at Queen's Club in London. 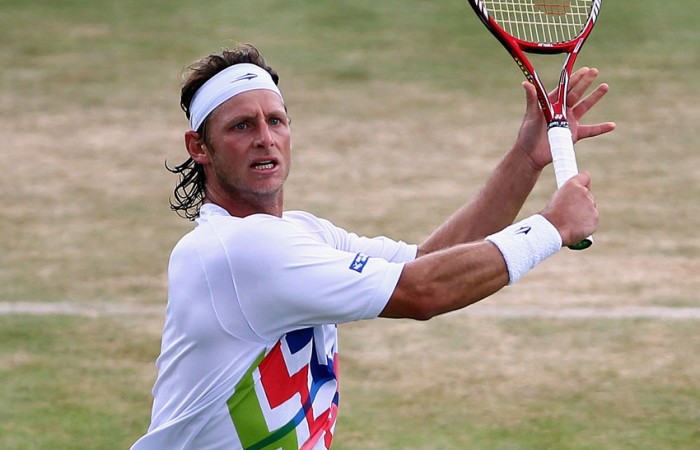 Former Wimbledon runner-up David Nalbandian will face Croatia’s Marin Cilic in the final at Queen’s Club after defeating Grigor Dimitrov 6-4 6-4 in the semifinals on Saturday.

Nalbandian reached the Wimbledon final in 2002 before losing to Australia’s Lleyton Hewitt and 10 years later he is back in the final of a grasscourt event for the first time since that memorable run at the All England Club.

The 30-year-old Argentine, seeded 10th, drew on his vast experience to subdue rising star Dimitrov and complete a remarkable run of three wins in 48 hours.

After rain caused a fixture pile-up on Friday, Nalbandian showed impressive durability to come from a set down to win against Edouard Roger-Vasselin and then Xavier Malisse.

Despite such a gruelling schedule, Nalbandian showed no signs of tiredness against Dimitrov and his reward is a first appearance in the Queen’s final and his first ATP Tour final since Auckland in January 2011.

Dimitrov’s fluid style and shot-making ability have drawn comparisons with Roger Federer, but the 21-year-old is only just beginning to fulfill his potential.

He cried tears of joy after surviving a barrage from big-serving Kevin Anderson to reach his first ATP semifinal, but this time he left the court shaking his head in frustration after a nervous display.

He was broken three times in the first set as Nalbandian took advantage of his jitters to open up a one-set lead.

Nalbandian looked on course for an easy win when he broke in the third game of the second set.

Faced with a lacklustre exit, Dimitrov finally began to play with some freedom and he unfurled a trio of sumptuous winners to break back in the sixth game.

But Nalbandian had too much experience for Dimitrov and moved him cleverly out of position to break for a 5-4 lead before serving out the match.

Earlier, Cilic beat former champion Sam Querrey 6-3 3-6 6-3 in the other semifinal to become the first Croat to reach the Queen’s final since Ivo Karlovic in 2005.

After missing the first seven weeks of the season with a knee injury, Cilic has gradually rediscovered his form and his shot-making ability eventually wore down Querrey.

Sixth seed Cilic was soon under pressure in windy conditions, but he showed remarkable resolve to fend off nine break points in an epic third game that lasted 20 minutes.

Querrey, who needed treatment on his right thumb midway through the first set, initially seemed shell-shocked by his failure to convert so many break opportunities.

He struggled to find any rhythm and a tame forehand from the American on the first of three break points handed Cilic the chance to serve out the set.

Cilic responded with a break of his own in the next game, but Querrey took the set after breaking for a second time.

A double-fault by Querrey on break point gifted Cilic a 2-0 lead in the final set.

Querrey appeared to have earned a lifeline when he broke back with Cilic just two games from victory, but the Croatian responded superbly, breaking again and then serving out the win.