While the draw gods have been kind to Sam Stosur, the rest of the Aussie contingent face tough tests as they bid to work their way through the French Open draw. 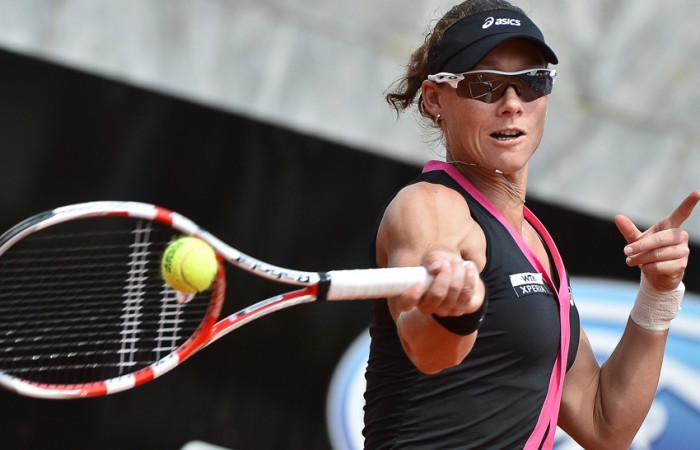 Sam Stosur has landed in the same quarter of the French Open draw as world No.1 Victoria Azarenka, the Australian’s career nemesis.

Lleyton Hewitt’s wretched luck in grand slam draws also continued on Friday when he was thrust into a likely second-round confrontation with top-seeded history-chaser Novak Djokovic.

While Hewitt’s campaign is unlikely to last beyond round two for the first time in more than a decade, Stosur will fancy her chances of making a deep run after being handed a favourable first-week draw.

Although Stosur will probably need to post a drought-busting victory over Azarenka to make the last four, the 2010 finalist should have too many guns for her early-round foes.

Stosur will open against Brit Elena Baltacha for the right to play either lowly-ranked American Irina Falconi or Romania’s Edina Gullovits-Hall.

Russian Nadia Petrova looms as Stosur’s first real test in round three, while German 12th seed Sabine Lisicki is likely to await Australia’s world No.6 in the round-of-16.

Then comes Azarenka, who has yet to drop a set against Stosur in six career meetings – all on hard courts.

Azarenka aside, title favourites Serena Williams and Maria Sharapova plus defending champion Li Na and fourth-seeded Wimbledon champion Petra Kvitova are all on the loaded opposite side the draw to Stosur.

Despite her dreadful head-to-head record with Azarenka, Stosur was feeling upbeat about turning the tables on the Belarusian should they clash on the Australian’s preferred claycourt surface at Roland Garros.

“For whatever reason, the way she plays against me, I find a little bit more difficult and that’s part of tennis – hopefully you get another opportunity to work that out,” Stosur told AAP.

“Hopefully I get another chance see what works and what doesn’t work.

“I do believe that I can beat her for sure, so hopefully it’s just a matter of time.”

Hewitt has a history of running into tennis titans Roger Federer and Rafael Nadal in the early round of majors and now he can start mentally preparing for a daunting match-up with Djokovic, assuming the luckless Australian gets past a qualifier first-up.

Bernard Tomic, seeded at a grand slam for the first time, also opens against a qualifier and could strike Scottish fourth seed Andy Murray in round three.

Teenage wildcard Ashleigh Barty faces a baptism of fire after drawing Kvitova for her main-draw debut in Paris.

Djokovic, who is bidding to become the first man since Rod Laver in 1969 to hold all four grand slam trophies at once, is projected to square off with Roger Federer in a rematch of their 2011 semifinal which the Swiss won to end the Serb’s 43-match winning streak last year.

Titleholder and six-times champion Rafael Nadal, who plays Italian Simone Bolelli in the first round, is again projected to face Murray in the semifinals.