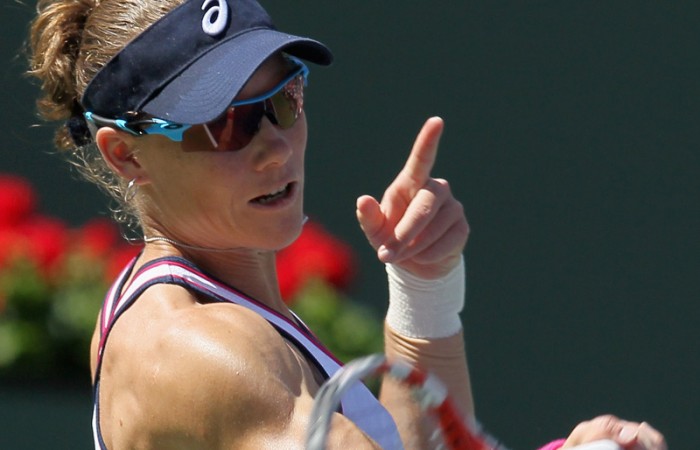 Australian Sam Stosur’s hopes of claiming a first Sony Ericsson Open title in Miami have been dampened somewhat after the draw gods placed her in a loaded quarter featuring some of the finest players in women’s tennis.

As the sixth seed Stosur has been gifted a bye into the second round, where she will face either a qualifier or Czech Klara Zakopalova. Williams looms as a potential fourth-round foe while Clijsters or Wozniacki could await in the quarterfinals.

Despite the monumental task, Stosur has some positives on her side, one being a winning 3-2 head-to-head record over Wozniacki.

In addition, Williams and Clijsters have not played since the Australian Open almost two months ago, and will come into the prestigious hardcourt event short of match-play.

Stosur owns some significant wins over five-time Miami champion Williams, most notably in the 2011 US Open final and in the quarterfinals at Roland Garros in 2010. Their head-to-head stands at 4-3 in Williams’ favour.

While she has yet to beat Clijsters, a two-time Sony Ericsson Open winner, Stosur did take their 2010 US Open quarterfinal to three sets, a match also played on American hardcourt.

However Clijsters, unseeded in Miami due to her limited activity in the past two seasons, will first have to get past Stosur’s compatriot Jarmila Gajdosova in the first round.

Gajdosova will be coming into the event high on confidence following her impressive run to the third round at Indian Wells and a return to the world’s top 50. If there was ever a good time to face the Belgian legend, this is it.

Two other Australians, Olivia Rogowska and Jelena Dokic, will also represent the green-and-gold in the main draw at Crandon Park.

Rogowska, a wildcard into the event, will take on a qualifier in her first match, with the winner to face No.17 seed Peng Shuai of China.

Dokic, who withdrew from her first round match at Indian Wells with a wrist injury, has been handed a tough opening round match against Australian Open 2012 quarterfinalist Ekaterina Marakova.

Dokic and Marakova will do battle on Tuesday in the second match of the day at Crandon Park’s Grandstand court.

On the men’s side, Aussie No.2 Matt Ebden will arrive in Miami brimming with confidence after his exciting trip to the fourth round at Indian Wells as a qualifier.

Beginning his Miami campaign in the main draw, his first opponent will be tall, big-serving American Sam Querrey, a similar player to the man he lost to in California, John Isner.

The winner of that match will face No.28 seed Kevin Anderson of South Africa, before a potential third-round encounter against eighth-seed Mardy Fish looms. Ebden impressively upset the top-ranked American during his Indian Wells run.

Aussie No.1 Bernard Tomic is also in the draw, looking to rebound from his disappointing first-round loss in the Californian desert.

He begins against Ukrainian Sergiy Stakhovsky, and should he win, will move into a second round showdown with No.5 seed David Ferrer.

Joining his top-100 compatriots will be Marinko Matosevic, who like Rogowska is a wildcard into the event.

The Victorian, sitting at a career-high mark of world No.122, will take on Robin Haase of the Netherlands in his first match.

Anastasia Rodionova is the lone Aussie in the qualifying draw.

Seeded 19th, she defeated Lesia Tsurenko in her opening match in straight sets, the 6-2 6-4 decision coming in one hour and 39 minutes.

She will next face wildcard Madison Keys for a spot in the main draw.

The young American recovered from the loss of the second set to defeat No.8 seed Olga Govortsova 6-3 5-7 6-4.