Injury has forced Agnieszka Radwanska to withdraw from the WTA Malaysian Open, while Olivia Rogowska's quarterfinal was suspended mid-match due to rain. 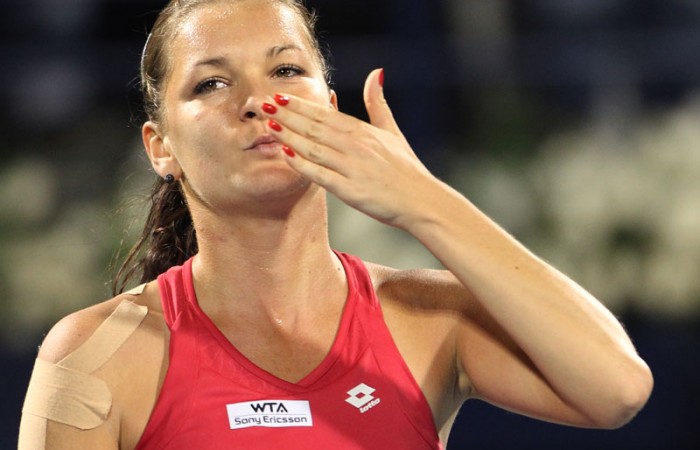 Top seed Agnieszka Radwanska pulled out of the Malaysian Open on Friday due to injury after a string of rain delays caused a schedule pile-up that forced her to face two opponents the day before.

“I’m so sorry I can’t continue. Had a great time in Malaysia and I hope to be back in future,” the Polish world No.5 told the centre court crowd in Kuala Lumpur after conceding her quarterfinal match-up with Taiwanese qualifier Su-Wei Hsieh.

Radwanska did not address the reason for her withdrawal, but WTA supervisor Pam Whytcross said the Pole had an elbow injury.

“We were called into the training room at 2pm and were informed that she had a right elbow injury,” Whytcross said.

Fifth seed Petra Martic came back from an opening-set loss to upset third seed Peng Shuai of China 4-6 7-6(3) 6-4 and advance to the semifinals.

The other quarterfinals were held over until Saturday because of rain.

Eleni Daniilidou of Greece was leading Australia’s Olivia Rogowska 6-2 3-2 when the rain hit and second seed Jelena Jankovic had yet to start her match against sixth seed Ayumi Morita of Japan.

Radwanska arrived in Malaysia on the back of a win in Dubai last Saturday.

But her first-round match with Akgul Amanmuradova – originally scheduled for Tuesday – was pushed back a day due to heavy rain at the Bukit Kiara Equestrian and Country Resort in the Malaysian capital.

The match was again halted by heavy showers on Wednesday with Radwanska leading 6-2 3-3.

It was only completed early Thursday afternoon and giving Radwanska two hours before returning to court to defeat Karolina Pliskova 6-4 6-4.

“It is disappointing but we wish her the best. It is still early in the season and the players have to manage their injuries carefully,” Whytcross said.

Radwanska had been wearing a thigh strap in the tournament while also complaining about a sore shoulder after beating Pliskova.