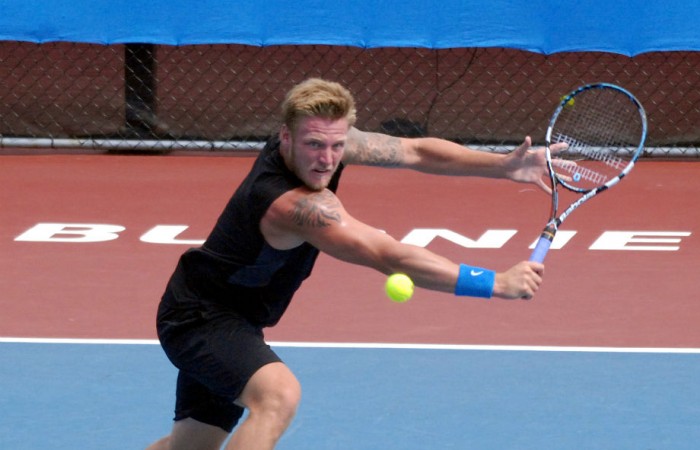 He then peeled off five games in a row to take the set 7-5 from a shell-shocked Millman. In between, onlookers saw some trademark emotion from Groth, smashing a ball into neighbouring houses in frustration. In the end though, he overwhelmed his out-of-sorts opponent with his serve – hitting 220km/h at match point – and heavy forehand.

“At 5-3 I just changed it up and made a lot of balls, a few higher and heavy ones. He seemed to struggle with that and I went on a bit of a run,” Groth said after the match.

After being drawn to face the top seed Denis Istomin in the second round before the Uzbek pulled out with injury, Groth is now one match away from the final.

“[Coming into Burnie] I felt like if I do everything right, I can win matches here. One match at a time, but there’s no reason why I can’t win this tournament,” he said.

Wang made light work of the in-form Ben Mitchell in straight sets.

Rogowska appeared in much better form than during her second round win on Wednesday. There, her game was wayward early before grinding out a win over talented Korean junior Su Jeong Jang.

Her quarterfinal performance against Shuko Aoyama of Japan was better from the outset, breaking early for 3-0 and racing through the first set 6-1. Despite more resistance in the second set from Aoyama, the Victorian was able to close out the win.

Australia is guaranteed a final representative in the women’s draw, with West Australian Bobusic defeating New South Wales’ Monique Adamczak in their quarterfinal. After exchanging breaks early, Adamczak was able to take the first set with some smart tactical tennis.

Changing up the pace with regular slicing off the backhand side, Adamczak also took the opportunity to attack where possible against the slight favourite Bobusic.

West Australian Bobusic then levelled at one set all, and broke early in the third. A second break from Bobusic cemented her advantage, closing out the set and the match 6-1.

Top seed Yurika Sema of Japan was too good for an inconsistent Arina Rodionova, blitzing the soon-to-be Australian 6-0 in the first set. Rodionova was able to level the match but was outclassed in the decider.

All centre court matches are live streamed, with commentary from Adrian Franklin and guests.