The seeds dominated in late afternoon matches at Melbourne Park today, with Olivia Rogowska, Isabella Holland and James Duckworth each recording straight-set victories and continuing their path through the draw at the Australian Open 2012 Play-off. 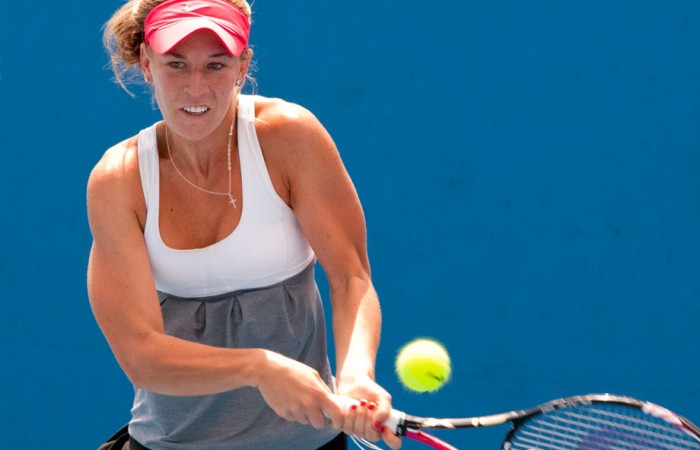 The seeds dominated in late afternoon matches at Melbourne Park today, with Olivia Rogowska, Isabella Holland and James Duckworth each recording straight-set victories and continuing their path through the draw at the Australian Open 2012 Play-off.

Second seed Rogowska maintained her perfect record in Group B, winning her second match in as many days against Daniella Jeflea – formerly Dominikovic – by a 6-3 7-5 scoreline.

Rogowska began the match strongly in hot and sunny conditions, breaking serve in the sixth game and going on to win the opening set.

Jeflea was coming off a three-set loss against Belinda Woolcock, and seemed determined to avoid the same fate against Rogowska, hitting back strongly in the second set and making the match far more competitive. Rogowska said she was wary of the No.7 seed’s strengths coming into the match.

“It’s always tough playing a girl in a round-robin who’s lost before because they come out swinging the next day, and you have a lot to lose and she doesn’t, so I was a bit nervous at the start of the match, but I relaxed a bit in the second and we both played some good quality tennis,” she said.

“Dani is always a tough competitor. She has the ability to play really well. Her serve is definitely her strength – it was only one break of serve in the second set – and I just toughed it out, ran to some balls, and I don’t think she expected them to come back a couple of times.”

After temporarily losing her feel on her forehand wing, Rogowska rediscovered it in the 10th game, smacking a winner down the line to level the second set at 5-5.

It proved a decisive moment. Jeflea double faulted to surrender her serve in the next game, and soon Rogowska had clinched the match – thanks to another forehand winner – after a strong service game.

Rogowska praised Jeflea’s performance and said she was also happy with her own form going into tomorrow’s match against Woolcock, a talented junior.

“Every match has been getting better so hopefully tomorrow will be even better than today,” she said.

“I’ll just try and stay calm, stay tough like I did today, and positive. I believe in myself and I’ve been playing some really good tennis lately, and I’m just going to go out there and try my best.”

As Rogowska was completing her match another was beginning on Court 6, with the vastly improved No.5 seed Duckworth taking on recent Optus 18s Australian Championships winner Luke Saville.

In the previous round Saville had defeated Chris O’Connell – the only player to defeat him in the round-robin 18s event – in three gruelling sets, and had many recent wins under his belt. Duckworth said this was something he was wary of entering the match.

“I know he’s a great player, I practice with him a lot, and he’s obviously had a great year [with] winning junior Wimbledon … I knew it was going to be a tough match and I was happy to get through,” he said.

Yet Duckworth simply had too much game for the South Australian, completing a relatively comfortable 6-2, 6-2 win. With superior fire-power from the back of the court, Duckworth also benefited from some cheap errors from the 17-year-old in the latter stages of the match to progress to the quarterfinals of the play-off, where he will next face No.3 seed Ben Mitchell, who was a 7-6 7-5 winner over Matthew Barton.

Duckworth’s form entering the event was also incredibly solid after an excellent year on the senior tour. He improved his ranking by more than 400 places throughout 2011 after a year of impressive results on the Futures and Challenger circuits.

He is playing on Melbourne Park’s Plexicushion after almost an entire year playing on clay, something that he said has taken a bit of adjusting to.

“It’s just [about] getting use to the different movements and the difference in the game style. Here the courts are a lot slower but shoot through a lot more than the clay that I’ve been on, I’ve got to adjust to that and start looking to hit through the court a bit more than hitting higher heavy balls,” he said.

“I just came back from South America playing a lot of Challengers with guys in the top 100. It was a great experience – my results weren’t that great, but I learned a lot and feel I’ve improved a lot over the past few months.”

Later in the afternoon two more results were decided, with a pair of women’s round-robin matches completing the day’s play.

Number 3 seed Holland won a deceptively gruelling straight-set affair against Alenka Hubacek to move to the top of Group C – alongside Arina Rodionova – with two wins from two matches.

Holland gained a couple of valuable service breaks in the opening set to take it relatively comfortably, but was forced to work extremely hard in the second against the gritty Hubacek, who retrieved tigerishly, mixed up her shots and attacked the net well.

An epic ninth game ensued at 4-4 in the second, where both players had multiple chances to either break (Holland) or hold serve (Hubacek). Holland finally smacked a backhand winner down the line past the net-bound Hubacek to gain the vital break.

“[In those situations] you start thinking about a lot of things, [like] I was missing a few forehands there, but you’ve got to go back to basics and think of two cues that work for you, and that’s what I did and it worked well for me,” Holland reflected.

“It was a long game and Alenka was playing some good tennis, so it was good just to get that game under my belt and serve out the match, so I was happy. It gave me a lot of confidence going into the next game.”

Despite some more intense rallies in that final game Holland imposed her big-hitting style from the baseline, using a heavy off-forehand to set up an easy put-away for match point, and clinchedg the match 6-2 6-4 after Hubacek committed a final error.

While Holland said she was happy with her form and preparation in the past few weeks thanks to lots of match practice, there are still some elements of her game that she is looking to improve going forward in the event, where she will next meet the also-undefeated Rodionova.

“I’m just going to look to use my serve and forehand a bit more. I haven’t been doing that the last few days, so hopefully I can do that tomorrow,” she said.

After going down a break in the first set Hadzic rallied impressively to snatch it away from Woolcock, but soon found herself faced with a one-set shootout when Woolcock comfortably took the second.

Surprisingly, Woolcock could not capitalise on her momentum. Hadzic broke in the opening game, and soon secured a 3-0 lead when she broke serve again to love.

Woolcock’s resistance completely crumbled when she blew a 40-0 lead in the fifth game to go down 5-0, and soon after Hadzic completed a 7-5 3-6 6-0 victory.