Wimbledon champion Petra Kvitova added the WTA Championships to her CV on Sunday beating Victoria Azarenka of Belarus 7-5 4-6 6-3 in the final. 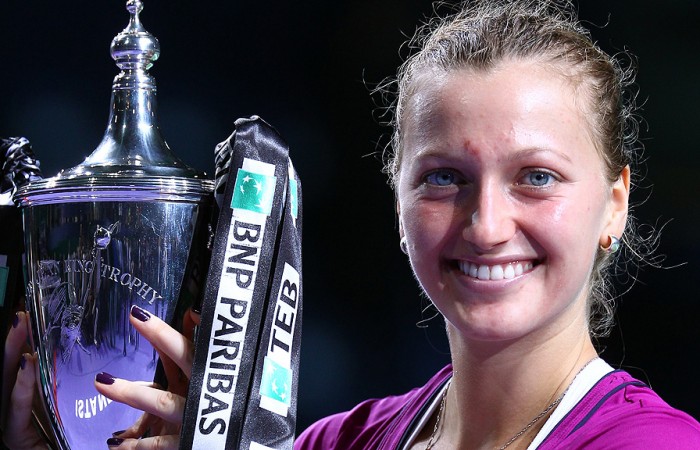 Petra Kvitova, the 21-year-old Czech left-hander who caused a sensation by winning Wimbledon as an outsider four months ago, proved she is now a fully fledged member of the sport’s elite by winning the WTA year-end Championships.

Kvitova did that with a 7-5 4-6 6-3 win over Victoria Azarenka, the fourth-seeded Belarussian, which earned her the second most important title of her career and further enhanced her growing reputation.

It also gained her a career-high year-end ranking of world No.2 – a tremendous surge from the 30th place at which she began 2011.

Kvitova narrowly prevailed in a two-hour 28-minute match because her hard-serving, flat-hitting, all-aggressive style was just about consistent enough to impose itself on Azarenka’s more solid, but slightly less potent qualities.

However, had Azarenka converted the two break points she held in the opening game of the final set, she might have added to her already increasing momentum and carried on to victory.

Instead, she had to settle for defeat with honour and a year-end ranking of three, equalling her highest, and suggesting that she too could be a contender for Caroline Wozniacki’s No.1 ranking next year.

In the tense closing stages Kvitova may have been helped by her familiarity with Azarenka’s game.

“We know each other very well,” she said before the final. “We played twice this year and I won both, so hopefully this final will be better for me mentally.”

Kvitova mostly played a solid final set, despite her propensity for risk-taking, an outcome which augured well for dealing with the even bigger occasions which are likely to come her way.

On the first break point against her at the start of that decider she launched a brilliant forehand inside-out winner, and on the second she dared an approach and combined it with a courageous stop volley.

She then took advantage of Azarenka’s disappointment by making the crucial break of serve in the next game, taking the first chance she had to achieve it.

Kvitova did that by returning a fine first serve and watching the follow-up hurtle over the baseline.

Azarenka placed her hand over her mouth in horror at how she had over-pressed with her forehand drive – as well she might.

She never got close to breaking Kvitova’s serve again after that, and suffered from the increasing pressure of having to play catch-up the longer the third set went on.

Azarenka did save one match point brilliantly in the penultimate game, spearing a backhand straight drive just inside the side-line, and converting the opening with a heavy drive volley.

But Kvitova was well pumped up when she came to close out the match on her next service game, completing it with some uncharacteristic defence and counter-attack, and rolling on her back in celebration.

She was the first Czech since Jana Novotna in 1997 to win the title, and it was her sixth title of the year. There are likely to be many more.