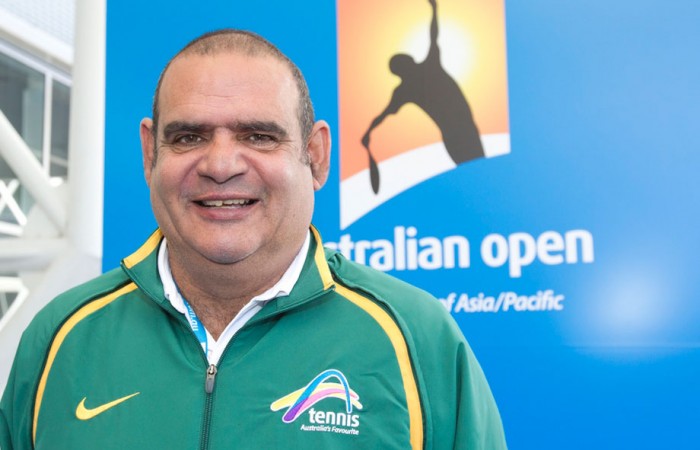 Goolagong will be based at Tennis Australia offices at Melbourne Park be responsible for increasing public awareness of the Learn Earn Legend! message, a federal government initiative to encourage more indigenous youth to complete their education and help them earn a good living, enabling them to support themselves and their communities.

Goolagong’s role as National Indigenous Coach will include:

“Creating pathways for the next generation of indigenous tennis players will be a major focus of my new role, for example – training pathways, National Academy and Australian Institute of Sport pathways,” Goolagong said.

Like his elder sister, Goolagong has achieved tennis acclaim. During the late 1970s and early 1980s he was awarded a tennis scholarship at a Texas College and played on the professional circuit for four to five years, then worked Australian tennis legends John Newcombe and Harry Hopman at their respective tennis camps in the United States.

A career highlight for Goolagong was playing mixed doubles on Centre Court at Wimbledon with
his sister Evonne in 1982.

“I am the only Australian indigenous male to have played atWimbledon,” Goolagong said proudly.

Goolagong joins Tennis Australia from the City of Whittlesea where he worked as Building Active Indigenous Communities Project Officer, which focused on helping Aboriginal and Torres Straight Islanders to become sport coaches, trainers, or to be involved in other non-physical roles in sport.

“There are a few similarities between my last role and new position with Tennis Australia,” Goolagong said. “Working for the council has given me some great foundations, especially in indigenous communities in and around Melbourne.”

Despite working for local government, Goolagong has never strayed too far from his tennis roots. “For the past two years I have held the role of president of the Lalor Tennis Club in Melbourne, and for the past 25 years I have coached in my spare time,” Goolagong revealed.

“I am currently coaching my 12 year-old son Jaidyn, and I have played an active coaching role at the Goolagong National Development Tennis Camps for indigenous youth over the past seven years. The development camps are a great way to bring next generation of indigenous tennis players together, and I believe these camps have helped me form solid relationships with indigenous players from around Australia, which will really help me in my new role as National Indigenous Coach.”