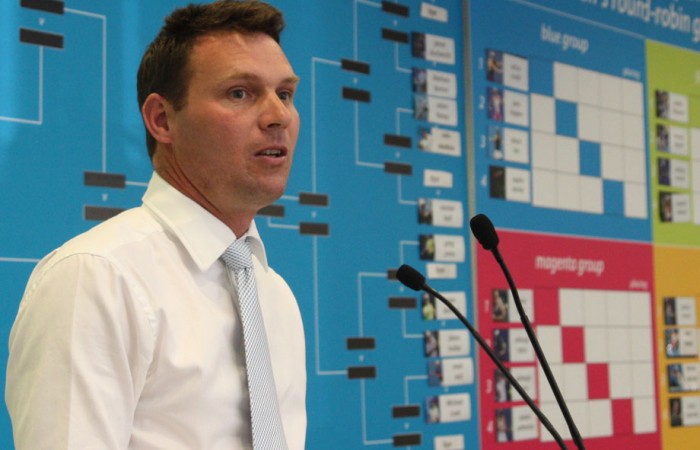 Tennis Australia’s Mark Handley has been appointed to the role which includes the position of Tournament Director of the Moorilla Hobart International.

“We are very pleased to announce Mark’s appointment. He was an outstanding candidate in an excellent field and he will bring a wealth of tournament experience, administration know-how and tennis knowledge to the position,” Tennis Tasmania President Peter Armstrong said today.

“Mark has an incredible passion for our sport and a tremendous work-ethic. He is already well known to the Tasmania tennis community through his great work at the Burnie International Pro Tour event and his enthusiasm for tennis is highly infectious. He will be a terrific leader for Tennis Tasmania,” Armstrong explained.

Handley’s impeccable tennis credentials include 20 years experience at all levels of the sport – as a player, coach, venue manager, business owner tournament director and now administrator.

In his role as Tournaments Manager at Tennis Australia Handley has grown the Tennis Australia Pro Tour, Optus Junior Tour and December Showdown events, as well as the important functionalities supporting them, such as Australian rankings, tournament software, regulation compliance, commercialisation, education and operations.

Key achievements include growing the Australian Money Tournaments from 19 events in 2007 to 59 in 2011; increasing tournament prize money by 94% (since 2005) and increasing the number of tournament entrants by 59% (since 2007), resulting in an 81% increase in competitive opportunities for Australian players since 2007.

His personable style and excellent communication skills have enabled Handley to build relationships across the board, engaging everyone from tennis players and club officials to local government and the business community.

Voluntary service to the tennis community includes stints as a Director and Council Member for Tennis Queensland.

“I am thrilled to be heading to Hobart and being part of such a strong organisation like Tennis Tasmania. I can’t wait to get started. I have seen a lot of great work done in the tennis community across the state to grow the sport and I am delighted that I have the opportunity to lead that community into the next phase of growth,” Handley said.

“The Domain Tennis Centre is one of the nation’s leading tennis facilities and I am looking forward to showcasing that facility with an event as prestigious as the Moorilla International. We have a tremendous team who have placed a lot of collective effort into building the foundations and we are all looking forward to capitalising on that success and presenting a world class event to the people of Tasmania.”

Handley will replace Michael Roberts in the role in September.