Graeme Holloway, a former Tennis Australia and Tennis Tasmania board member, was one of Tasmania’s finest sportsmen, administrators and all-round nice guys. 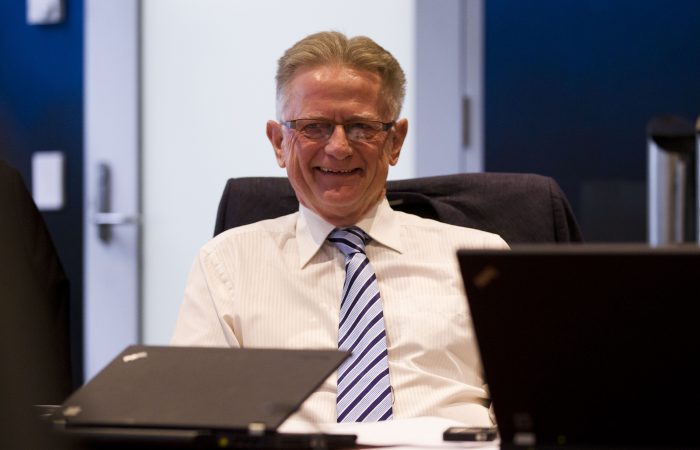 With great sadness, the tennis family is mourning the loss of Graeme Holloway, former Tennis Australia and Tennis Tasmania director, on Tuesday 19 February, following a year-long battle with cancer.

One of Tasmania’s finest sportsmen, administrators and all-round nice guys, Graeme followed in the footsteps of his father, Viv Holloway OAM – a Tennis Australia life member – onto the Tennis Tasmania board from 2005-2008 before joining the Tennis Australia board in 2008.

Graeme was passionate about promotion of the game at local, national and international levels even after his retirement from Tennis Australia in 2013.

He played competitive tennis from an early age and was a former state grasscourt champion. Graeme, his parents and siblings, all played tennis and he used to say that it was all his family discussed at the dinner table when he was growing up. He continued to play racquet sports, either lawn or real tennis, several times a week until a just few months before his passing.

He followed his distinguished 15-year squash career by taking up tennis again in the early 1990’s.

In 2000, he was part of the first Tasmanian tennis team to win the Division One Australian Championship in the Teams’ Carnival held in Adelaide.

For five years, from 2003-2008, he was the President of the Tennis Seniors Tasmania board.

His working life as a pharmacist was recognised with a Pharmaceutical Society of Australia Lifetime Achievement Award for his service late last year. Prior to this achievement he was awarded life membership, and for many years he participated in pharmacy administration and also mentoring of young pharmacists. They intend to name an award in his honour this year.

In 2015, he won the first of two consecutive World Over-65 Real Tennis Singles Championships.

Graeme enjoyed many squash, real tennis and seniors’ tennis team trips away – within and outside Australia whilst representing Tasmania. He was highly competitive thus achieving such outstanding results.

Loving husband to Deborah, father to Penny and Tom, grandfather to Zoe, Harry and Alice and brother to Jill and Anne (dec), Graeme’s empathy for others was a feature of his character and he will always be remembered for his service to tennis in Australia. He was held in very high esteem by his peers in all facets of life and will never be forgotten.

The family has requested in lieu of flowers for donations to be made to the University of Tasmania, noting ‘in memory of Graeme Holloway’ to go towards a new prize in his name.

The funeral will be held in Hobart today, Monday 25 February at 3pm.