Barty to play Brisbane International in 2020

World No.1 and reigning French Open champion Ash Barty will play at next year's Brisbane International, staged at Queensland Tennis Centre on 6-12 January. 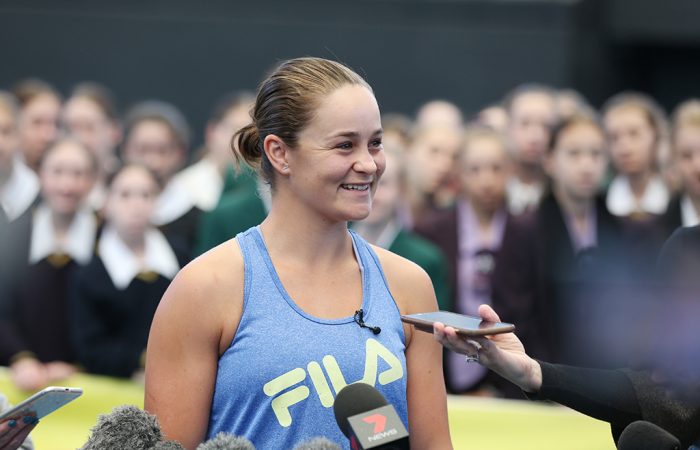 World No.1 and French Open champion Ash Barty has confirmed she will start next season at the Brisbane International in Queensland from 6-12 January 2020.

Queensland Premier Annastacia Palaszczuk made the announcement during a welcome home celebration at Pat Rafter Arena on Thursday.

The WTA Premier tournament will have an increased prize pool and will take place alongside the men’s ATP Cup Brisbane group stage.

“It is going to be very special to play at the Queensland Tennis Centre again. I have always enjoyed amazing support in Brisbane and feel so incredibly lucky to play at home,” said Barty, the second only Australian female player in history to top the world rankings.

Good to see you on home turf, @ashbar96. Welcome back 🙌 #GoAussies pic.twitter.com/JyjK3KG8eA

“I have great memories of the packed stands during our Fed Cup semifinal win over Belarus and I know the atmosphere will be just as exciting during the Brisbane International.

“The Brisbane International always attracts an incredibly strong field because it’s the perfect start to the season and great preparation for the Australian Open.”

Said Palaszczuk said: “It means tennis fans around Queensland and Australia have a chance to see Ash Barty in action.

“She is not only an amazing tennis player and champion but she’s a great Queenslander and role model.”

Welcome home Ash – you were Queensland’s Number One long before you were the world’s number one! 🥳😍

Also great to announce Ash will be playing the Brisbane International next year – great for tourism and jobs. #qldpol 🎾 🎾 🎾 pic.twitter.com/mwW8BGZzf0

Brisbane’s Deputy Mayor Krista Adams said she was thrilled that fans will get a chance to see Ash Barty play in front of a home crowd.

“The 2020 Brisbane International will give tennis fans the chance to see some of the sport’s top female talent right here in Brisbane, and we look forward to welcoming Ash Barty back to our city,” Cr Adams said.

“Brisbane has a proud sporting culture and strong reputation for hosting major and significant events, which are worth more than $150 million annually to the local economy.”

“This will be the first time Queensland fans will have the chance to see Ash play in her home state after her extraordinary achievements this year,” he said.

“Queenslanders are rightly proud of Ash, how she holds herself on and off court and what she’s been able to achieve is an inspiration for all Australians.”

Tickets for the Brisbane International will go on sale in September.