Australia will take on Belarus at Brisbane's Pat Rafter Arena on 20-21 April, with both teams aiming for a place in the Fed Cup World Group final. 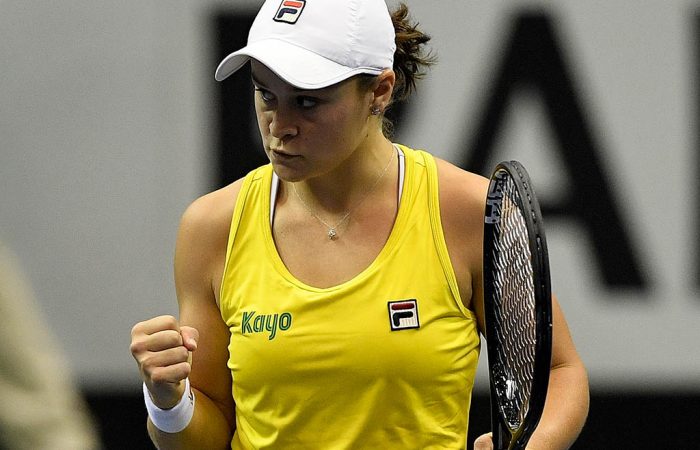 Brisbane has been named as the host city for Australia’s Fed Cup by BNP Paribas World Group semifinal against Belarus from 20-21 April 2019.

The tie will be played on hard court at Pat Rafter Arena as Fed Cup returns to Brisbane for the first time since 2016.

The Aussie team earned their spot in the semifinals when Queensland’s Ashleigh Barty led the side to a historic 3-2 win over the USA in Asheville, North Carolina, in February.

The last time the team reached the Fed Cup semis was in 2014, when they went down to a powerhouse German team.

“We’re excited to play another Fed Cup tie at home, and we are very much looking forward to coming back to Brisbane,” Australian Fed Cup captain Alicia Molik said.

“The whole team, led by Ash (Barty) worked hard for the win over the USA and I can honestly say that winning the tie was one of the highlights of my career.

“Everyone is highly motivated to keep that success going. Playing for your country is always special, and a home semifinal against such quality opposition is both an honour and a privilege.

“Belarus has a group of incredibly strong players and we expect them to be tough. But we also know we’ll have terrific support from the fans and look forward to a great turnout in Brisbane.”

“Off the back of an inspiring win against the USA, we couldn’t ask for a finer group of role models than our current Fed Cup team and I know our strong tennis community and sports fans alike will be keen to come and support them in their quest for a place in the World Group final for the first time since 1993,” he said.

“It’s particularly special to be given the opportunity to host this tie in Brisbane, given the recent success of our Queensland players who featured so significantly in the February win against the USA and across the Aussie summer.”

“It means even more elite tennis will be played right here in Brisbane – already home to the Brisbane International and from next year, the new ATP Cup,” Ms Jones said.

“Tennis is loved by Queenslanders right across the state. The Brisbane International attracts tens of thousands of visitors and injects $10 million into the economy each year, so we expect the Fed Cup to be another strong driver of tourism for the state.

“Ash Barty is one of Queensland’s very top sportswomen so to get the chance to see her play some of the world’s best right here in Brisbane and attempt to secure Australia a spot in the Fed Cup final is not to be missed.

“The Easter weekend is already one of the busiest of the year in terms of tourism so hosting the Fed Cup will give visitors another world-class experience to add to their itinerary.”

“The Fed Cup semifinal will once again give tennis fans the chance to see some of the sport’s top female talent right here in Brisbane, and we look forward to welcoming Ash Barty back to our city,” Cr Adams said.

“Brisbane has a proud sporting culture and strong reputation for hosting major and significant events, which are worth more than $150 million annually to the local economy.”

Single session and two-day ticket packages will go on sale to the public via Ticketek at 12pm AEST (Brisbane time) on Monday 11 March at www.ticketek.com.au/fedcup.