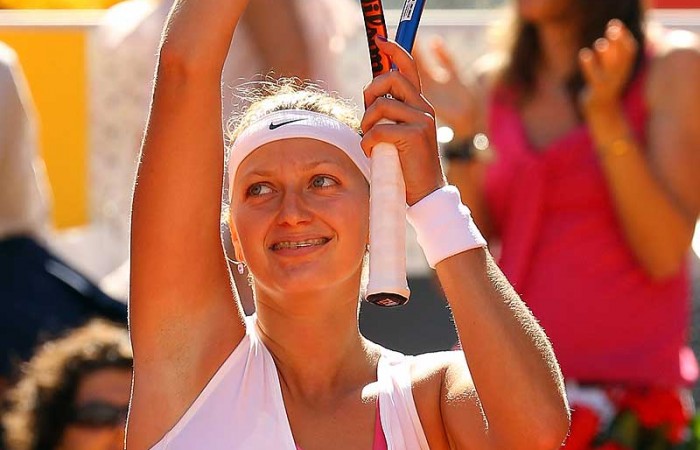 Petra Kvitova defeated Victoria Azarenka 7-6 (7-3) 6-4 on Sunday to win the Madrid Masters women’s title and earn herself a place in the top 10 in the world rankings.

The upset victory in one hour, 42 minutes prevented the Belarus player from winning her third title of the spring campaign after winning Miami and Marbella back-to-back.

Azarenka, ranked fifth, has been one of the form players of recent months, and still stands a respectable 19-3 on the season.

“I played some of my best tennis today. This has been an amazing tournament for me,” said Kvitova, the only left-hander in the top 10 and ranked 62nd a year ago.

Her resounding victory further cemented her reputation as a giant killer, with Azarenka her ninth career top 10 victim.

On Sunday, Kvitova dominated with 40 winners to 10 for Azarenka.

“Congratulations to Petra. She had a great week and deserved to win today,” said a teary Azarenka at the trophy ceremony.

Her consolation will be a predicted move to a career-high four in the world in the new rankings on Monday.

Kvitova becomes the second outsider in a row to win the women’s event at the Caja Magica after France’s Aravane Rezai upset Williams in the 2010 final.

Kvitova, 21, who began the week ranked 18th, took a firm grip in a match littered with seven breaks of serve.

Azarenka was also playing after a late-night doubles finish in the midnight hours in chilly temperatures with all four players bundled up on court.

The contrast between that scene and the sunshine of Sunday could not have been more apparent.

Kvitova began the match with a break of serve and held her nerve despite losing the lead when Azarenka broke back in the third game.

As the set wound into a tiebreaker, it was the Czech who prevailed, winning the last five points to seal it after 52 minutes.

A run of four breaks in the second set finally ended as Kvitova saved two break points to hold for 5-3. A game later, The desperate Azarenka saved a match point, but Kvitova served out the victory a game later on her second winning opportunity.