World number one Caroline Wozniacki reached the final of the WTA clay court tournament at Charleston on Saturday with a 6-4 6-4 victory over Jelena Jankovic. 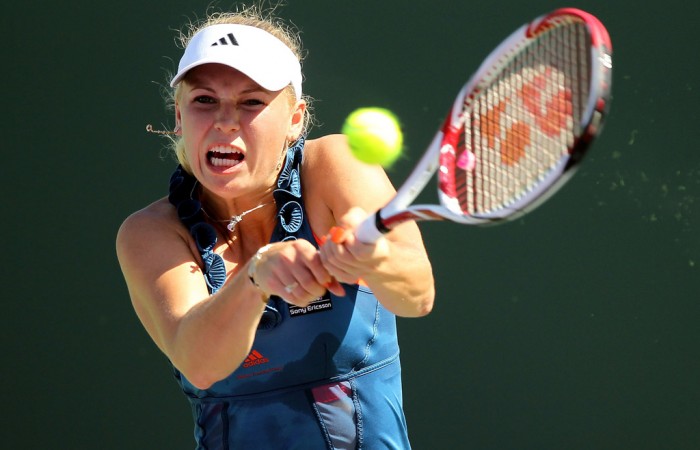 World number one Caroline Wozniacki reached the final of the WTA clay court tournament at Charleston on Saturday with a 6-4 6-4 victory over Jelena Jankovic.

Top-seeded Wozniacki outlasted Jankovic in a match marked by grinding rallies and, in the first set, numerous breaks of serve.

Finally, Jankovic said, Wozniacki’s ability to extend the rallies was just too much.

“She always makes you play an extra ball,” the third-seeded Serbian said.

Wozniacki reached the Charleston final for the second time in three appearances.

She was runner-up here to Sabine Lisicki in 2009, but last year was forced out in the semi-finals with an ankle injury.

Wozniacki’s progress hasn’t all been smooth, however.

She needed two tiebreakes to subdue Barbora Zahlavova Strycova on Thursday and overcame a 4-2 deficit in the third set to beat Belgian Yanina Wickmayer in the quarter-finals.

The 20-year-old Dane said she knew she couldn’t afford to give Jankovic any early advantage.

“I had to be aggressive and hit it deep because (Jankovic) is such a good fighter,” she said.

On a windy stadium court, the first three games all went to deuce. Jankovic had built a 4-3 lead when Wozniacki won three straight games – breaking twice – to pocket the set.

Wozniacki stayed steady in the second and capitalised on Jankovic’s errors.

“Some other players, you think it will be a winner,” Jankovic said. “With her, it somehow comes back.”

Vesnina had thought last month about skipping Charleston because of a nagging wrist injury.

Her father and coach, Sergey Vesnin, suggested a change in technique that alleviated the pain.

Her tenacity was rewarded as Vesnina, who hadn’t been past the quarter-finals in five prior appearances, beat four seeded players on her way to her first singles final of the season.

Her victims this week included world number five and defending champion Samantha Stosur in the third round.

“I’m telling you, I’m just enjoying my time on the court,” she said.

Wozniacki and Vesnina have played five times before, Wozniacki winning four of their encounters.

“I know her game pretty well,” Vesnina said. “And it just depends how I feel, how Caroline will play tomorrow.”