Tennis superstars who united for a special evening at Rod Laver Arena have helped raise close to AUD $5 million for bushfire relief efforts. 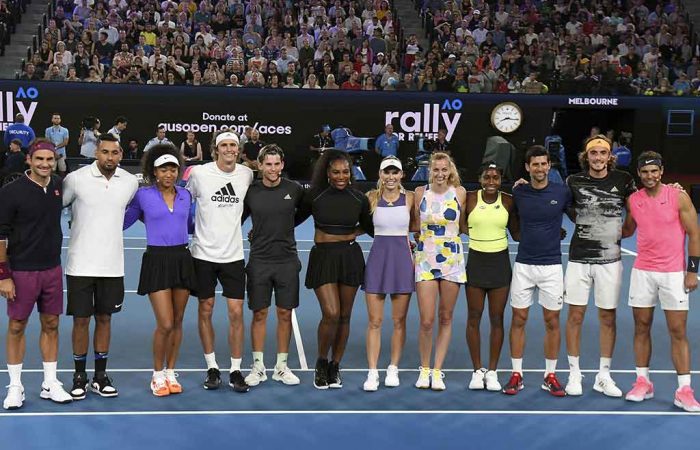 It was only fitting that midway through the Team Williams v Team Wozniacki Fast 4 Rally for Relief match, traditional doubles was briefly abandoned in favour of the entire teams taking to the court.

While it’s rare for so many superstars – including Australian Open champions Serena Williams, Novak Djokovic, Rafael Nadal, Caroline Wozniacki and Naomi Osaka  on this occasion ­– to share a stage, it also symbolised the way the entire tennis community has banded together to support those impacted by the bushfires devastating many parts of Australia.

One hundred per cent of money from tickets sold for Rally for Relief, which was completely sold out soon after the event was announced last week, was directed to the Victorian Bushfire Appeal.

Seven-time AO champion Williams, leading a team that included Djokovic, Nadal, Dominic Thiem and Petra Kvitova, related how Australia is a special place for many competitors.

“I’ve had so many great matches on this court and in this country,” said the 23-time Grand Slam champion.

As fans cherished the mega-star line-up – Osaka, Coco Gauff, Stefanos Tsitsipas and Alexander Zverev also featuring in Wozniacki’s team – there were also significant reminders of the impact of the devastating fires, including firefighters who were court-side to relate their recent experiences.

None were more popular than Deb, a keen social player at her St Arnaud  tennis club but more importantly a dedicated volunteer firefighter, with the Stuart Mill fire brigade, who had the opportunity to take to the court with her hero, Nadal.

Nadal was also a hero in another significant way, the world No.1 announcing that he and Roger Federer had talked hours earlier and determined they would donate AUD $250,000 to bushfire relief efforts together.

“Hopefully that keeps inspiring the people to support this terrible disaster that we are going through,” said the AO 2009 champion to rapturous applause from the capacity Rod Laver Arena crowd.

That generous spirit flowed on as Federer and Nick Kyrgios completed an exhibition set, the Swiss shifting attention back to the spirit of the evening after securing victory in the tiebreak.

“We get along very well. We’ve had some epic matches over the years,” said Federer. “This was fun. This was not about winning.”

Instead, it was about bringing the superstar tennis community together after seeing so much devastation throughout Australia.

“It’s been difficult (to watch),” said Federer. “You wish that this doesn’t happen in your country. In Switzerland we don’t have these kind of extreme situations. I’m always happy to help.

“I wanted to raise awareness and raise money. And tell the people to still travel to Australia.”

It was a sentiment that Kyrgios had also spectacularly demonstrated as one of the first players to pledge a donation for every ace he hit this summer, the Australian offering $200 for each ace that he strikes.

“It’s been an emotional couple of weeks,” said Kyrgios, who first witnessed the impact of the bushfires while at home in Canberra.

“It’s so hard, I just wanted to send a message. That was an opportunity for me to use my platform,” Kyrgios explained, relating his elation when Alex de Minaur, John Millman and other players followed.

“I woke up the next day and it (had) kind of exploded. It was so emotional.”

Amid so much devastation else the generosity continued at Melbourne Park, Rally for Relief concluding with the news that more that the special evening had helped take the total raised to almost $AUD 5 million..

And with #AO2020 around the corner there's more tennis to come, more aces to be hit and more money to be raised.

“(It’s) an incredible number,” said Federer. “(There is) so much needed. I hope it keeps going.”

Fans can do so through a range of special initiatives, including a Tennis Charity Auction, Pledges for Aces or supporting AO Music for Relief on Sunday.