Ash Barty saves a match point in a thrilling win over Kiki Bertens to advance to the China Open final, where either Naomi Osaka or Caroline Wozniacki awaits. 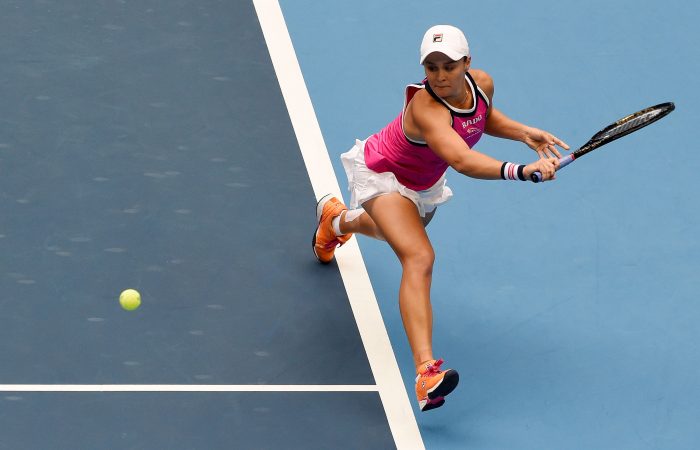 Ash Barty overcame a gallant opponent and her own unforced errors to move through to the China Open final on Saturday in Beijing.

Barty scored a gritty 6-3 3-6 7-6(7) win over Kiki Bertens, saving a match point in the final-set tiebreak to emerge victorious.

It was her fifth win in five meetings against Bertens – although four have come in three tough sets – and sets up a final against either Naomi Osaka or Caroline Wozniacki, who play their semifinal on Saturday night.

“I think particularly probably from middle of the first set right through until I probably broke early in the third, Kiki went into lockdown mode,” Barty assessed.

“She didn’t give me very many cheapies as well. She does that extremely well.

“I remember from the Miami match, it was very similar. There were periods of that match where she went into complete lockdown. I had to fight and try to find a way through.

“I thought the quality was exceptional from both of us at times. Win or lose, you come off feeling pretty good about it. Obviously it sucks there’s only one winner.

“But pretty happy with the way I was able to fight and dig in late in that third, as well.”

Yet there were signs the Dutchwoman was settling into the contest as the set wore on, with Barty requiring six set points to finally pocket the opener.

And as much as Barty fought, she could not make inroads into Bertens’ service games, allowing the eighth seed to maintain her advantage and send the match to a third set.

Barty’s game unraveled in errors in the first game of the final set, with four errors handing Bertens an immediate break.

Yet Barty broke straight back when the Dutchwoman’s own errors proved costly.

Barty looked the more likely when she earned a break point for a 3-1 lead, yet she couldn’t convert it.

Bertens ended up running off three straight games to take a 4-2 lead.

When Barty dumped a slice backhand into the net to hand Bertens a 4-3, 30-0 lead, it was the Australian’s 22nd unforced error of the set – almost as many as she committed in the first two sets combined.

Yet still the world No.1 would not surrender.

Clutch Barty is clutch: and this is all due to how happy she's been this year 😉 pic.twitter.com/MLLaEXhjat

“I think a lot of it comes down to trusting myself, knowing that once I make a decision with the balls, to trust it and go after it. And don’t play in a way where I’m fearing what could happen,” Barty said.

“I think early in the third, my first service game, I missed three forehands, all the right misses, if there is such a thing. It was doing the right thing. It was just execution.

“My back was against the wall late in the third (and) I came up with some really good stuff.”

Bertens served for the match at 5-4, yet faltered. She surged ahead 3-0 in the final set tiebreak, but could not maintain her lead.

This was gritty, tense, compelling tennis.

Bertens moved ahead 7-6 to score her own match point, but Barty hung tough, winning the final three points of the match to end a memorable contest.

It was her second three-set win in two days; Barty on Friday ousted Petra Kvitova after dropping the first set.

“It’s just been really nice to be able to play, like, two matches the last two days (at an) incredible level,” Barty said.

“Regardless if I was on a plane home today, I probably wouldn’t have stressed any more or less about it. It’s just been a really, really good level the last two days.”