Top seed Caroline Wozniacki advanced to the semifinals of the BNP Paribas Open at Indian Wells on Thursday after Victoria Azarenka retired early in the first set. 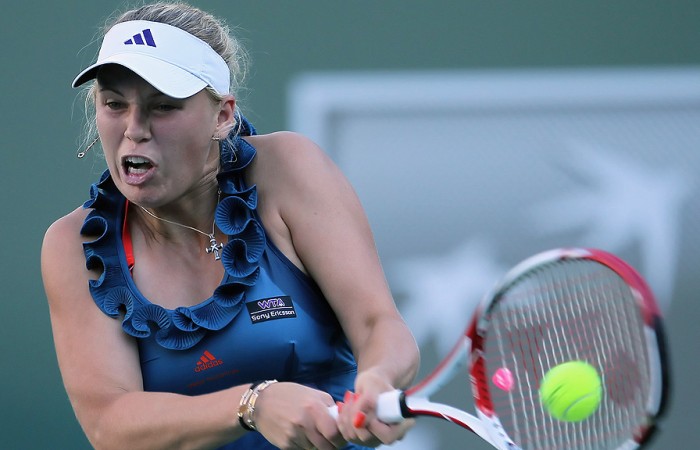 Top seed Caroline Wozniacki advanced to the semifinals of the BNP Paribas Open at Indian Wells on Thursday after Victoria Azarenka retired early in the first set.

Wozniacki, of Denmark, was ahead 3-0 when Azarenka packed it in after taking a lengthy medical timeout to receive treatment for an injury to the left side of her hip.

She suffered the setback just 10 minutes into the match on the second point of the third game while stretching to try and return a shot.

World No.1 Wozniacki, who is good friends with Azarenka, said she was sorry to have to win that way.

“When I saw her get hurt I thought that’s not the way we want to play,” Wozniacki said. “I hope she can have a rest and then recover in time for Miami.”

On the men’s side Spain’s Tommy Robredo also withdrew Thursday with an injury before his centre court match with Juan Martin del Potro even got started.

Wozniacki moves on to play the winner of a quarterfinal match between Maria Sharapova and China’s Peng Shuai.

Wozniacki beat Azarenka for the fourth time in six career meetings and has now reached the semi-finals in her last four tournaments.

“I have had so many good results lately,” Wozniacki said.

“Everything is working out for me.”

Azarenka was hoping to reach her first semifinal of the year before she got hurt.

The drama took place in the third game of the first set after Wozniacki had won the first two points of the game.

The Belarus was stretching to hit a return shot behind the baseline when she landed hard on her left leg and grimaced in pain.

She covered her face with her hand and dropped to all fours before gingerly making her way over to her chair and calling for the trainer. The trainer put towels on the court and massaged Azarenka’s upper leg before taking her into the medical room.

Azarenka returned 14 minutes later, played the final two points of the game and then after consulting her coach packed it in.

Wozniacki stayed on the court after the match was called off to display a Japanese flag that she and Azarenka had posted a good will message on that read “Our thoughts are with you, Caroline and Victoria”.

Wozniacki said the two tennis stars wanted to show their support for the victims of the Japan earthquake-tsunami crisis that killed thousands and now threatens survivors with radiation.

Robredo injured his left abductor muscle in his fourth round victory over Sam Querrey and said he would also miss the next tournament in Miami.

“I didn’t even try. I knew I was not even going to play so that is why I pulled out,” Robredo said.

Del Potro advances to the semifinals where he will square off against either Rafael Nadal or Ivo Karlovic.