Most women tend not to enjoy being asked about their age, but 40-year-old Kimiko Date-Krumm, the oldest woman in this year’s Moorilla Hobart International draw, does not seem to mind one bit. 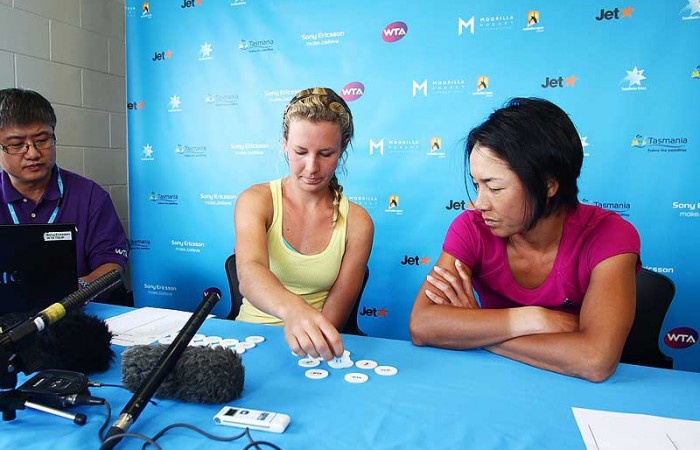 Most women tend not to enjoy being asked about their age, but 40-year-old Kimiko Date-Krumm, the oldest woman in this year’s Moorilla Hobart International draw, does not seem to mind one bit. In fact, she is keen to celebrate still playing world class tennis against players more than half her age.

“We make jokes in the locker room and have a laugh about my age,” said Date-Krumm with a smile after she and 19-year-old Australian Olivia Rogowska attended the tournament’s official draw on Saturday.

“I don’t know how old Olivia is but she could be my daughter (laughs) so of course people talk about it and we laugh but once I’m on court I don’t think about my age at all.”

Date-Krumm enjoyed a flourishing career in the 1990s, breaking into the top 10 in 1994, but she retired in September 1996 and took a 12-year break from the sport. Eventually, though, her experiences of picking up a racquet again for an exhibition match and some gentle persuasion from her husband Michael enticed her back into competition.

“For 12 years I enjoy my life but I missed sport and Michael, who is a racing driver, missed it to so we talked about it a lot,” said Date-Krumm, who returned to match play in April 2008.

“I played an exhibition match and when I was preparing for that I really enjoyed it. I had stayed fit doing lots of different sports while I was retired so I was ready when the time came.”

Date-Krumm, who won the eighth WTA Tour title of her career in Seoul last year, is still a force to be reckoned with and is sure to be a handful for her first round opponent in Hobart, eighth seed Angelique Kerber. Since her comeback she has made a speciality of knocking big names out of prestigious events, notably her sensational first round upset win over Dinara Safina at Roland Garros last year.

She also defeated Safina at Stanford a few months later and the Russian former World No.1 must be glad to have avoided the redoubtable Date-Krumm in the Hobart draw, at least until the later stages of the tournament.

“Safina knows how to win and it is never easy to play her anywhere,” said Date-Krumm. “She has power, she has height; she has everything. She used to be No.1 and one day she could come back there.”

Date-Krumm and Safina are just two of a string of marquee names gracing the Domain Tennis Centre this year. Marion Bartoli (whom Safina plays in the first round), Hopman Cup finalist Bethanie Mattek-Sands, Brisbane semi-finalist Anastasia Pavlyuchenkova and British star Elena Baltacha will also be in action as well as Australian favourites Alicia Molik, Jarmila Groth, Sally Peers and Rogowska.