The following four rules help to explain the court and its dimensions to players. Following these rules will allow for a higher percentage of tennis to be played.

(see figure 3.1) as you move into the two sections of the court closer to the net, a greater angle is created in which you can execute the stroke, allowing/putting your opponent under more pressure.

Having your strokes clear the net by over a metre will help create depth on your strokes. Depth is the backbone of any attacking game, as it creates pressure on your opponent and can often lead to a short ball.

(see figure 3.2) Each player should know the safe lines to hit through that will give them some margin for error. By creating safe lines a metre inside the lines, it will help to reduce errors and build pressure on the opponent; this is specifically useful when approaching the net.

Each player should understand the areas of the court to hit to when under pressure and out of position. When taken out of court a player should aim for a high and deep shot down the middle to buy time to get back in position. 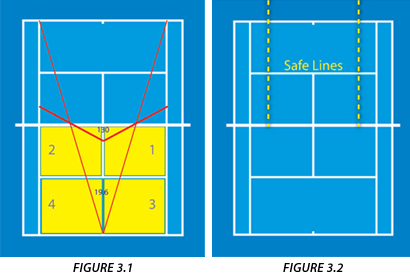