Ebden and Purcell: “We’re just trying to do Australia proud”

After winning their first Grand Slam title as a team, Matthew Ebden and Max Purcell are determined to build on their Wimbledon success. 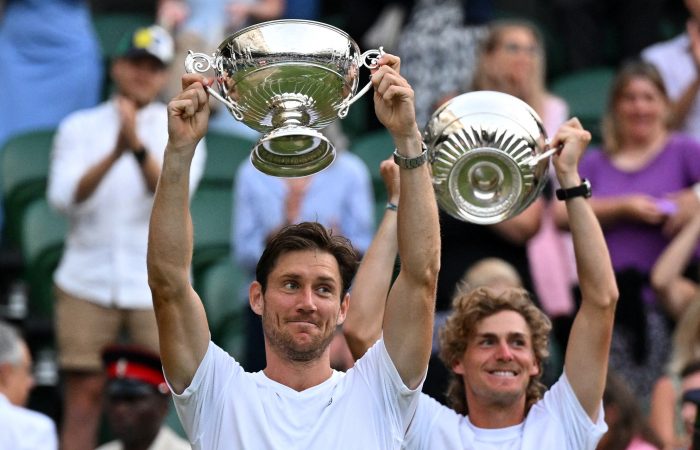 “It’s further than a dream come true. I suppose it’s a goal or a plan or a belief come true. But, yeah, it feels amazing.”

The No.14 seeds become the first all-Australian team in 22 years to capture a Wimbledon gentlemen’s doubles title – and did so in dramatic fashion, winning a four-hour battle against defending champions Nikola Mektic and Mate Pavic.

“To be out there over four hours, 7-6 in the fifth set, finish a Wimbledon final with a match tiebreak. It was insane,” Ebden said.

“A lot of the crowd were loving it. They were telling us at the end when we were walking around they were entertained. What a fitting end for a Centre Court, Wimbledon final. (It’s) stuff you dream of.”

After Ebden sealed victory with an ace, both players fell to the ground in elation.

“My father once told me when he was watching television, you watch guys win Grand Slams, he’s like, ‘No, it’s disrespectful to fall on your back. Shake your opponent’s hands first’. That’s spoken by a guy who’s never won a Grand Slam,” Purcell said.

“Once you win a Grand Slam, you fall on your back. The grass feels great on your back. I just did that, kind of rolled over, looked at Matt, he was on the ground. I was like, ‘Yes, we have done it’.”

It caps a remarkable run for 34-year-old Ebden and 24-year-old Purcell. Five of their six matches extended to five sets, they defeated four seeded teams and spent more than 20 hours on court.

They saved eight match points in total – three in the opening round, then a further five in the semifinals. This makes them the first Wimbledon champions, in any event, to save match points in multiple matches.

“We tried to win every match in straight sets,” Ebden said. “Every team since the first round, we’ve had a bloody tough draw, played unbelievable teams every match. Multiple Grand Slam winners, other title winners. The level of doubles is super strong.

“Our draw, you look at it, look at the scores. We’re sitting here with the title, but first round we could have been out with one point. The level is insane.”

Determination, as well as an appreciation for the opportunity, inspired them when under pressure.

“We’re just trying to do Australia proud, show Aussie grit and fight, win Wimbledon for Australia. We have a rich history,” Ebden said.

Remarkably, this was only their fourth Grand Slam tournament as a team and improves their major record together to 14 wins from 17 matches.

“We definitely believe that we’re the best doubles team in the world, if not one of the best,” said Ebden, signalling qualifying for the season-ending ATP Finals and adding more Grand Slam titles are their major goals.

Despite a 10-year age gap between the pair, the mutual respect is evident.

“We’re great friends off the court,” Purcell said. “Matt is a great role model for me in terms of professionalism and maturity. I think since we’ve kind of teamed up, I’ve definitely felt more comfortable on the tennis court, more secure in my game. I’m just loving where we’re at.”