While Ajla Tomljanovic exits Wimbledon 2022 in the quarterfinals, she sees another career-best run at SW19 as a stepping stone to further success. 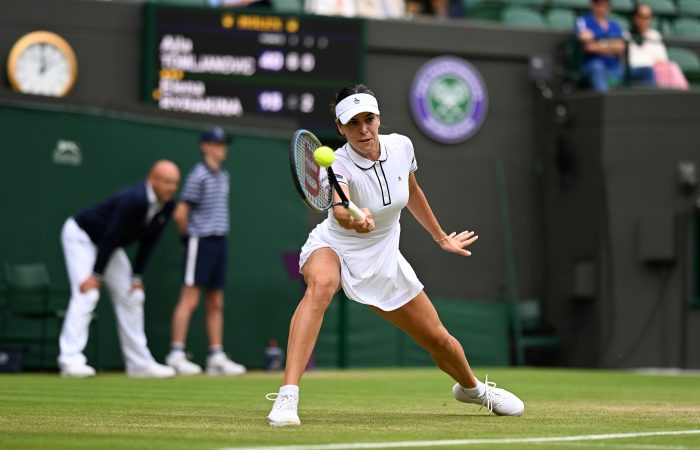 Ajla Tomljanovic will take valuable lessons from another career-best run at Wimbledon, which ended today in the quarterfinals.

Tomljanovic challenged the higher-ranked Elena Rybakina with an early display of power and precision, before the No.17 seed from Kazakhstan emerged with a 4-6 6-2 6-3 victory.

In her longest match of the tournament, it took Rybakina an hour and 51 minutes to seize her come-from-behind win.

At world No.44 entering Wimbledon 2022, Tomljanovic is ranked 21 places behind No.23 Rybakina. But while Tomljanovic was making a seventh main draw appearance at SW19, her 23-year-old opponent is contesting The Championships for only the second time.

The contrasting experience showed as Tomljanovic took control from the outset. Combining power with precision, especially with her backhand, Tomljanovic was the early aggressor on Wimbledon’s No.1 Court.

Managing her own serve beautifully, the Australian was quick to capitalise on some nerves from Rybakina. A determined Tomljanovic earned two break points in an extended third game, converting on her third to seize some impressive momentum.

Tomljanovic maintained the lead to take the first set in 41 minutes – the first that the typically unruffled Rybakina had surrendered at the 2022 Championships.

“It was a bit disappointing ’cause I felt like I played a really good first set. (It was) actually one of the cleanest sets I’ve played all tournament,” Tomljanovic said.

But a powerful serve was always going to factor for the big-hitting Rybakina, who entered today’s match with a tour-high 197 aces for the season and an unparalleled 29 at this Grand Slam.

There were 15 more against Tomljanovic, providing a critical edge when the Australian’s level wavered in the second set.

Tomljanovic responded superbly to initial pressure from Rybakina, immediately breaking back when she surrendered serve for the first time early in the second set. But with a run of seven games straight, Rybakina convincingly claimed the ascendancy.

There were brief signs of a recovery when Tomljanovic broke serve as Rybakina first served for the match at 5-2 in the third set, but it proved only temporary. Flawless on her second opportunity to serve it out, Rybakina completed her victory with a signature ace.

Rybakina books her place in the semi-final with a 4-6, 6-2, 6-3 win over Ajla Tomljanovic#Wimbledon pic.twitter.com/OZTdZPlYNx

“I felt like the middle of that second she definitely raised her level. I mean, she started serving really, really good. And just less errors from the back,” said Tomljanovic, who took some consolation from rallying back in the third set.

“I tried to fight my way back. It was too far gone. I mean, that 3-5 game, again, she served crazy good. Yeah (I’m) just disappointed because I felt like with my game I was really there.”

Rybakina, who becomes the first player from Kazakhstan to progress to a Grand Slam semifinal, will take valuable confidence into her next match against Simona Halep. She hit 34 winners against 28 unforced errors, converting five of the nine break opportunities she earned.

Tomljanovic will also take positives in her big-picture assessment of a second straight Wimbledon quarterfinal run, in which she also claimed come-from-behind wins over Barbora Krejcikova and Alize Cornet.

“I’m really proud of the fact that I managed to play back-to-back quarters. I think that’s something that I’ll be proud of no matter what,” she commented, while acknowledging that today’s exit was a “bit of a different feeling” to 2021, when she exited to eventual champion Ash Barty.

“I came in (today) really believing that I could win, where maybe that wasn’t the case last year. That’s what’s just extra disappointing.”

Even so, it’s a building block for Tomljanovic, who will carry her winning momentum into the hard-court season.

“The good thing is that I’m playing good tennis, and I don’t see why I can’t put myself out there again in the next Slam,” she pointed out. “I definitely think it’s been a step forward, and I can just build off of that.”