Australian qualifier Jason Kubler won his fourth straight match with a first-round main draw win over Denis Kudla at Roland Garros, while four of his compatriots exited the 2022 tournament on Sunday. 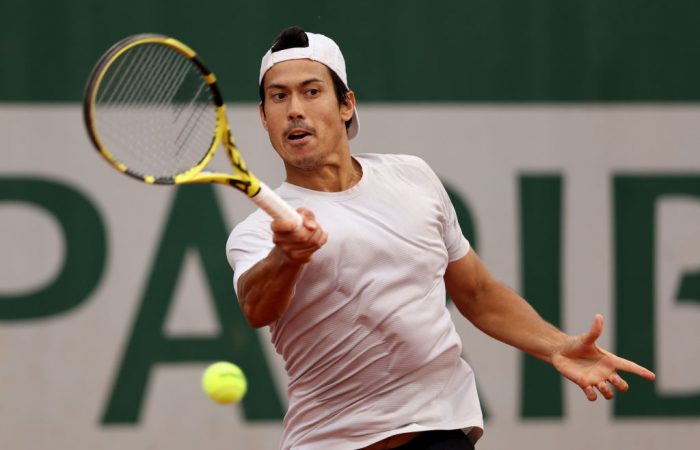 Jason Kubler has maintained his winning ways at Roland Garros, advancing to the second round with a straight-sets win over Denis Kudla.

The Australian qualifier, playing for the first time in the main draw in Paris, will next face either No.10 seed Cameron Norrie or French wildcard Manuel Guinard for a spot in the last 32.

Kubler was one of five Aussies in action on Sunday, yet the lone winner; Christopher O’Connell, Thanasi Kokkinakis, Alexei Popyrin and Astra Sharma were ousted from the clay-court major.

Roland Garros marked the only major at which Kubler had not previously appeared in the main draw, but he has now won four straight matches in the French capital to improve his 2022 clay-court record to 20-4.

🇦🇺 Kubler moves through after three on the trot! 💪

And his 7-6(5) 7-6(2) 7-6(3) triumph over the experienced Kudla reflected his confidence, given he was forced to overcome multiple challenges and was on the receiving end of the American’s 51 winners.

In the first-set tiebreak he rebounded from 3-5 down to win four straight points, then let slip a 4-1 lead in the second set, and a 5-3 lead in the third, before steadying to prevail.

The win, clinched with a backhand winner after three hours and 14 minutes, is just his second career Grand Slam victory; in 2018 he upset 19th seed Roberto Bautista Agut to reach the second round of the US Open.

Kubler’s second-round opponent will be determined when Norrie and Guinard clash on Monday.

Earlier on Sunday, O’Connell’s campaign ended in a four-set loss to Aljaz Bedene of Slovenia.

Making his second appearance at Roland Garros, O’Connell would rue an inability to capitalise on opportunities as Bedene claimed a 2-6 4-6 7-6(5) 1-6 victory.

Bedene converted seven breaks of serve from 13 opportunities, with O’Connell converting only two of his 12 chances.

The Slovenian made just 38 unforced errors compared to 54 from O’Connell who picked up a Challenger title on clay in Croatia last month.

O’Connell lost the first two sets but revived memories of last year’s epic first round fightback against Tommy Paul at Roland Garros when he took the third set in a tiebreak.

Bedene re-established control immediately in the fourth, breaking twice on the way to a 6-1 result.

Fognini was marginally better in most key statistics over three tight sets, with a clear advantage in break point conversion.

Both players created seven break point chances, and while the Australian couldn’t land any of his until trailing 1-4 in the third set, Fognini capitalised four times, once in each of the first two sets and twice in the third.

Popyrin has reached the third round of a major on four occasions but has drawn Rafael Nadal and Fognini in daunting first round match-ups at Roland Garros in the past two seasons.

Kokkinakis and Sharma, meanwhile, were each able to claim a set in their opening Roland Garros matches, before exiting to higher-ranked opponents.

Sharma, who is world no.144 compared to her 71st-ranked opponent, took the first set from Russia’s Varvara Gracheva but was unable to maintain her winning momentum.