Nick Kyrgios has progressed to the second round at an ATP 250 tournament in Houston, his first on clay in almost three years. 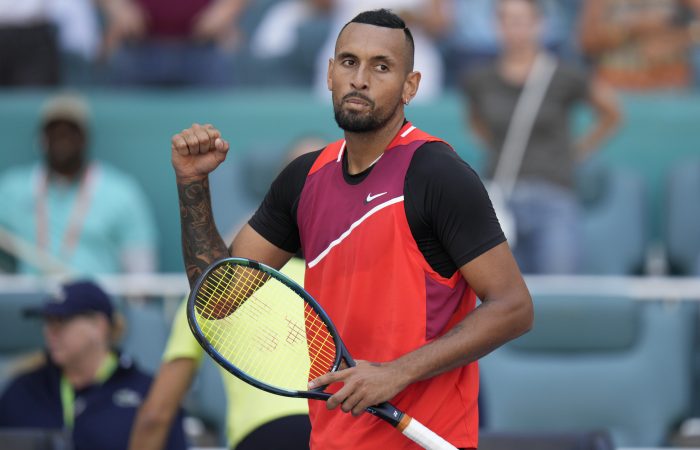 Nick Kyrgios has made a winning return to clay at an ATP 250 tournament in Houston.

Contesting his first professional match on clay since May 2019, Kyrgios fought back to defeat American Mackenzie McDonald in three sets.

It is the 26-year-old’s eighth win from his past 10 matches, all of which have been against higher-ranked opponents.

Coming through on the clay 👌 @NickKyrgios wins his first clay-court match since 2019 with a 4-6 6-3 6-4 comeback over McDonald.#USClay pic.twitter.com/iqL3RiJCpD

The victory propels world No.94 Kyrgios into a second-round showdown with seventh-seeded American Tommy Paul, the world No.34 and Roland Garros 2015 boys’ singles champion.

World No.83 Thompson conceded only 10 points on his service games in the 94-minute encounter.

Ajla Tomljanovic, Australia’s new top-ranked woman, was closing in on a first-round victory at a WTA 500 tournament in Charleston.

However, rain forced the match to be rescheduled for tomorrow with Tomljanovic leading American qualifier Sophie Chang 7-5 4-4.

Australia’s Astra Sharma has lost her opening-round singles match at a WTA 250 tournament in Bogota.

The 2019 finalist was eliminated by Dutch qualifier Suzan Lamens, who scored a 6-4 1-6 6-4 victory in an almost two-hour battle.