Ebden and Purcell: “We want to channel the Woodies”

Runners-up in the AO 2022 men’s doubles final in only their second tournament together, Matthew Ebden and Max Purcell now have further success in sight. 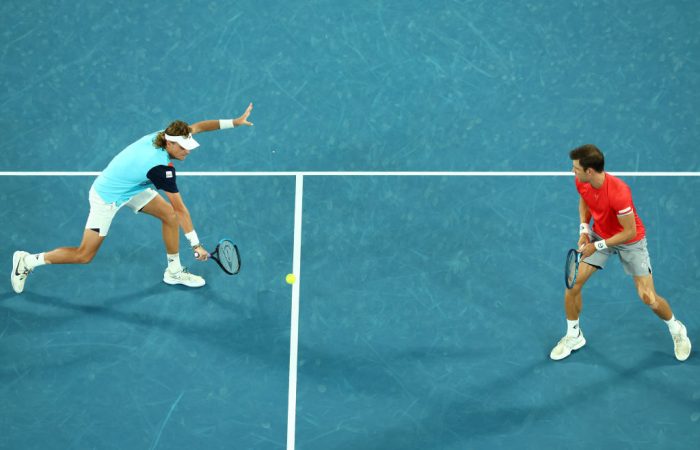 Matthew Ebden and Max Purcell are looking ahead with optimism after their outstanding run to the Australian Open 2022 men’s doubles final.

In only their second tournament together, the pair backed up their quarterfinal showing at the 2021 US Open and with a runner-up finish to Thanasi Kokkinakis and Nick Kyrgios the message from the duo is simple – they’re not done yet.

“I want us to play Grand Slam finals and be winning Slams, and I hope we can win many,” said Ebden after last night’s final.

“I want us to channel the Woodies and try and win a lot and I really believe we can. Even tonight I feel like there wasn’t too many teams or basically nobody out there who might have beaten us tonight, except maybe those guys playing that well and that big.

“It took that to beat us, so we have to look ourselves in the mirror and go, ‘Okay, too good’. If that’s what it takes to beat us, sure.

Purcell is the youngest member of the pair at age 23, and he noted the positives while reflecting on their 7-5 6-4 defeat.

“Yeah, they played great. It’s obviously hard going in playing against five doubles teams in a row and then playing them where they’re just a lot better at the back than a lot of the other guys we played,” Purcell said.

“But I mean, if you told me I was going to make another final at the start of this week I definitely would have said, ‘sweet’, and would have been stoked for it. I’ve got no regrets. I loved playing out there. It was an amazing crowd. Hopefully I can turn up a third time and win it.”

Last night’s decider was the first all-Australian men’s doubles final at the Australian Open since 1980, with an electric atmosphere remaining at Rod Laver Arena after Ash Barty earlier won the women’s singles title.

“Two years ago, I was in the final with Luke (Saville) and it was completely different,” said Purcell.

“We played in the middle of the day on Sunday, on the same court but it just felt completely different.

“It’s a big crowd but I’m not in awe of the situation, I’m not out there feeling nervous or anything like that. I’m feeling really comfortable on the big stages at the moment so hopefully I can get a few more singles matches on the big stages, as well.”

For Ebden, there was an equal pleasure in being part of a hugely successful Australian contingent at the Australian Open, with eight local players contesting finals in their home Slam.

“Yeah, it’s awesome I’m not going to lie,” he said. “We lost to the boys tonight but even this last week we were egging them on to try and get through and all of us get to the final.

“It’s great for Australian tennis with Ash, Dylan was in his final, we had some Aussies in the mixed final, two pairs now in the men’s doubles final.

“It’s been a long 10 years of turning all those things around and it’s been a pleasure to keep doing it. Even now, 30, whatever I am, young Max here, he’s an old soul already, he has a lot of experience for a young guy. But, yeah, of course we’re proud of it, Australian tennis is in a very healthy state.”

For Ebden, fatherhood is calling, but 2022 shapes as a big year on tour for both men as they look to build on a wonderful start to their partnership.

“I’ve got the baby coming, Max is off to some singles tournaments in the next couple of weeks. I’ll be back on the singles and doubles court probably by March.

“We both naturally play well in doubles. The way we play even in singles it carries through to doubles, so we are confident we can do big things.”