AO 2022: Ebden and Purcell set to make their mark

Bringing a fascinating blend of youth and experience, Matt Ebden and Max Purcell are excited for an all-Australian men’s doubles final at Melbourne Park. 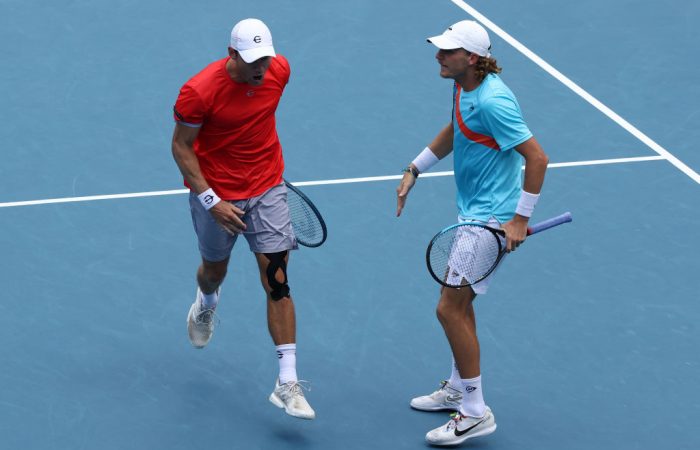 M & M’s or Special K? Whatever your treat of choice, it’s going to be a bumper Saturday night at Melbourne Park.

For the first time since 1980, four Australian males will compete in a home Grand Slam doubles final, and all of them have travelled down different roads to reach the title match.

Alongside the fanfare surrounding the rise of Nick Kyrgios and Thanasi Kokkinakis, the unassuming yet extremely successful pairing of Max Purcell and Matthew Ebden have written their own brilliant story.

The pair has played just nine matches together, winning eight of them, with their first outing a bold run to the quarterfinals at last year’s US Open.

“Since Maxie was probably 17 or 18, when he was almost out of juniors’ we practised a lot. I think we even played each other once or twice,” Ebden said this week.

“The opportunity came up last year to switch pairs before the US Open, so I quickly asked him. We’ll try to go all the way here and plan to play as much during the year as we can.

“We still have singles as well that we’re doing. Max is young and going for the singles, too. We’ll keep the partnership going for sure when we can.”

For Purcell, this is a second trip to the Australian Open final, with the 23-year-old reaching the 2020 decider with Luke Saville.

“I only ever won one tour-level match before I made the final with Luke. That was a slightly more surprising run,” Purcell said.

“Matt and I reached the quarters in the last Slam we played and I kind of knew that we could do well at Slam level.

“I kind of always thought I could play doubles. I know Matt can play some great doubles too.”

Ebden is 11 years his senior, but Purcell believes the pair’s on-court chemistry comes down to their similar professionalism and composure.

“Matty and I are pretty straight to the point. There’s no mucking around,” he said.

“It seems really professional, but it’s also nice to have someone that’s similar to me with all that.

“I’m not worried about anything. I have a bunch of notes from Matty about the next pair we play. Matty is really invested in winning so I’m loving it.”

“I feel we are pretty level-headed, we’ve got a lot of composure, especially Max at such a young age,” he said.

“I don’t know if I had quite that level of composure at that age. We want to win, but we have perspective. If we don’t win, it’s not the end of the world.

“We want to win but we have fun too.”

Ebden and Purcell called upon a narrow defeat in the quarterfinals of last year’s US Open, to Joe Salisbury and Rajeev Ram, ahead of yesterday’s return meeting with the two-time Grand Slam winning pair.

“Those guys are arguably the best, if not the second best team probably in the last year or two consistency-wise,” Ebden said.

“We played them a few months back, lost a super close one, had some match points, could have won, didn’t win. We thought we could turn it around here in our home Slam.

“That was our first tournament together and this is only our second tournament, so it’s a good combo that works.”

Their final against, Special K’s Kokkinakis and Kyrgios, shapes as an intriguing match.

“We spoke to them post-match and congratulated them. They congratulated us. It’s awesome to have two Aussie teams playing off in the final. What could be better really?” Ebden said.

“They love the show and all that. We know exactly what they can do. We respect how they can play. We have to find a way to counter that and do what we do best.

“It’s nice to see them doing well. Thanasi winning his singles event (in Adelaide), and them getting through this tournament to the finals has been great.”

Purcell notes the challenge of counteracting their power, and the contrasting styles of play that will be on show.

“They’re playing big-time singles out there. We’re bringing a bit more doubles to the court,” he said.

Ebden revealed the Australian pairs have been collaborating on strategy throughout the tournament.

“I’ve been talking to Thanasi these last few matches trying to help him beat the guys he’s been beating,” he said.

“We’ve been wanting them to win so we could all win and play off in the final. That’s what we got and that’s awesome.”