Aussie stars putting on a show at Australian Open 2022

Fan favourites Nick Kyrgios and Thanasi Kokkinakis are back in action on day nine at Australian Open 2022. 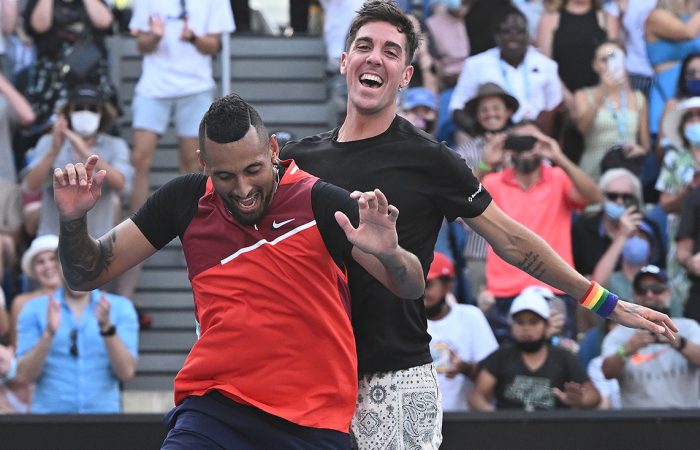 There are plenty of reasons for Australian tennis fans to be excited about day nine at Australian Open 2022.

World No.1 Dylan Alcott is one of 13 local contenders scheduled to compete at Melbourne Park today.

The 31-year-old Melburnian is through to the semifinals in the quad wheelchair singles competition and is buoyed by the electric atmosphere across the precinct.

“Everyone is so up and about and really enjoying it,” Alcott said.

“If you haven’t come yet and you want to, come in a safe way, get here. It’s a great vibe and I’ll keep putting on a show, enjoying the moments and hopefully make everybody proud.”

Aussie favourites Nick Kyrgios and Thanasi Kokkinakis have progressed to the quarterfinals in the men’s doubles competition, delighting their many fans.

The Special Ks are sure to attract a big crowd again when they compete at Kia Arena this afternoon.

“At the end of the day that’s what it’s all about, it’s entertainment and having fun,” Kokkinakis said.

World No.1 Ash Barty takes a more serious approach, which is paying off too.

The 25-year-old has advanced to the women’s singles quarterfinals and plays world No.21 Jessica Pegula at Rod Laver Arena tonight.

“It’s just about going out there on that day, trying to give you the best that you can,” Barty said of her mindset.

[1] Ash Barty (AUS) v [21] Jessica Pegula (USA)
Women’s singles, quarterfinals, Rod Laver Arena, night session, first match (from 7pm AEDT)
Barty has progressed to the Australian Open quarterfinals for the fourth consecutive year and is yet to lose a set this tournament. The 25-year-old recognises she can’t get comfortable though, especially against 27-year-old American Pegula. “Jess is able to control the baseline. She’s able to take time away from you, take balls particularly off her backhand,” the world No.1 noted. “She loves these courts, she made a quarterfinal here last year.” Barty is aiming to match her career-best result at Melbourne Park and reach the semifinals like she did in 2020.
Head-to-head record: Barty leads 1-0
Last meeting: Barty won 6-3 6-3 (Roland Garros, 2019)

[1] Dylan Alcott (AUS) v Andy Lapthorne (GBR)
Quad wheelchair singles, semifinals, Kia Arena, first match (from 11am AEDT)
This is clash between two players very familiar with each other’s game. Alcott has played the 31-year-old Lapthorne in five Grand Slam finals, including twice here at Melbourne Park. Alcott is currently on a five-match winning streak against the world No.5 and has won all eight of their previous meetings at the Australian Open. Playing the final tournament of his stellar career, Alcott is determined to continue enjoying the moment. “This is awesome, let’s rip it up one last time,” he said.
Head-to-head record: Alcott leads 31-7
Last meeting: Alcott won 6-2 6-2 (Roland Garros, 2020)

Heath Davidson (AUS) v [2] Sam Schroder (NED)
Quad wheelchair singles, semifinals, Court 8, first match (from 11am AEDT)
Davidson is enjoying a career-best Grand Slam run, having advanced to a singles semifinal for the first time. The world No.7 is now eyeing a maiden finals berth. To get there, the Melbourne local will need to beat the AO 2021 finalist and world No.2 Schroder. The 22-year-old from the Netherlands has won his past five matches against the 34-year-old Australian, including in the Melbourne Wheelchair Open quarterfinals earlier this month.
Head-to-head record: Schroder leads 7-2
Last meeting: Schroder won 6-3 6-1 (Melbourne, 2022)

[5] John Peers (AUS)/Filip Polasek (SVK) v [3] Marcel Granollers (ESP)/Horacio Zeballos (ARG)
Men’s doubles, quarterfinals, Margaret Court Arena, second match
Peers and Polasek carry positive momentum into this quarterfinal showdown, having won 21 of their past 25 matches together. The fifth seeds face two-time major finalists Granollers, a 35-year-old Spaniard ranked No.7, and Zeballos, a 36-year-old Argentine ranked No.6. This is a third career AO quarterfinal for 33-year-old Peers, who is Australia’s top-ranked doubles player at world No.12. His 36-year-old Slovak partner is ranked No.9 and is the defending AO champion.

[WC] Thanasi Kokkinakis (AUS)/Nick Kyrgios (AUS) v [6] Tim Puetz (GER)/Michael Venus (NZL)
Men’s doubles, quarterfinals, Kia Arena, third match (not before 3.30pm AEDT)
Aussie wildcards 25-year-old Kokkinakis and 26-year-old Kyrgios are experiencing a career-best run in a Grand Slam doubles draw. They are lighting up Melbourne Park, attracting huge crowds each time they play. “We just have fun out there and I think the crowd gets behind it,” Kokkinakis said. The close friends have eliminated two seeded teams to reach this stage and now face the No.6 seeds. Puetz is a 34-year-old German ranked No.18, while Venus is a 34-year-old from New Zealand ranked No.15.

[WC] Jaimee Fourlis (AUS)/Jason Kubler (AUS) v Sania Mirza (IND)/Rajeev Ram (USA)
Mixed doubles, quarterfinals, Margaret Court Arena, third match
The 22-year-old Fourlis and 28-year-old Kubler are enjoying an incredible run, saving multiple match points in both of their wins so far this tournament to advance to their first Grand Slam quarterfinal. “Somehow we are here and it’s been so much fun,” said Melbourne local Fourlis. They face an experienced combination today – Mirza is a former world No.1 and a four-time AO mixed doubles finalist, while world No.4 Ram is a two-time AO mixed doubles champion.

[2] Zhang Shuai (CHN)/John Peers (AUS) v [8] Ena Shibahara (JPN)/Ben McLachlan (JPN)
Mixed doubles, quarterfinals, Kia Arena, fourth match
Peers has a busy day, competing in two Australian Open quarterfinals. The in-form world No.12 has advanced to his second career AO mixed doubles quarterfinal – and first since 2015. The 33-year-old, who was once a ballkid at the tournament, is now looking to advance to his first AO mixed doubles semifinal. Peers and world No.8 Zhang face Japanese duo Shibahara, a 23-year-old ranked No.6, and McLachlan, a 29-year-old ranked No.49.