Australian Alex de Minaur has advanced to the fourth round in an Australian Open men's singles draw for the first time in his career. 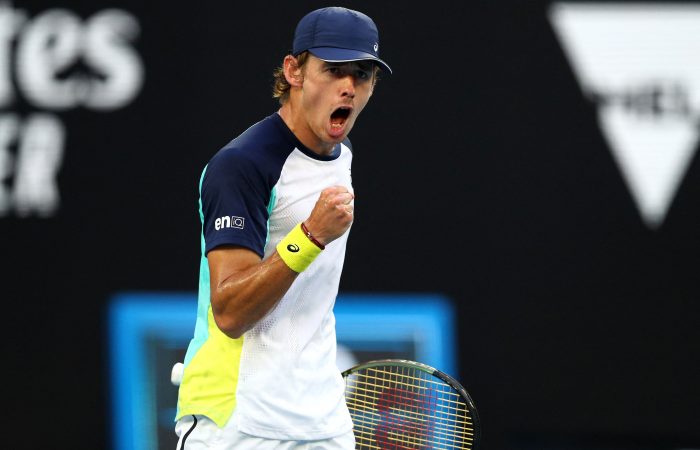 Alex de Minaur entered Australian Open 2022 feeling confident he could produce some sensational tennis – and he is certainly delivering on that promise.

The 22-year-old Australian scored an impressive 6-4 6-4 6-2 victory against Spaniard Pablo Andujar in a third-round showdown at Rod Laver Arena this evening.

“It was pretty exciting to play here on Rod Laver Arena at 7pm and in front of the great Rod Laver himself,” De Minaur said.

“It’s a pretty amazing feeling and I got the win, so what more can I ask for.”

De Minaur’s growing confidence showed against the world No.83, skillfully moving his 35-year-old opponent around the court and being aggressive when he got the chance.

The No.32 seed struck 34 winners to Andujar’s 19 in the two-hour and seven-minute encounter. De Minaur also had great success at the net, winning 18 of the 24 points when he ventured forward.

The result propels the world No.42 into the Australian Open’s fourth round for the first time, bettering third-round exits in 2019 and 2021.

“I love playing here, the atmosphere is electric. There’s no place I’d rather be,” De Minaur said. “I’m in my home Slam, doing what I love. I’m living the dream.”

De Minaur becomes only the fifth Aussie man to advance to an Australian Open fourth round in the past two decades.

De Minaur now faces world No.10 Jannik Sinner in the fourth round. The 20-year-old Italian has won both of their previous meetings, including the championship match at the Next Gen ATP Finals in 2019.

“He’s a hell of a player,” De Minaur said during his on-court interview. “I’m just looking forward to another opportunity to come out in front of you guys and doing what I love to do.”

The Aussie will be aiming to record his second career top-10 win at a Grand Slam – and a first at Melbourne Park.

“He served unbelievable. When he got into the net he just knocked away those volleys,” O’Connell conceded. “I had no rhythm out there and he was just too good.”