Maddison Inglis is determined that a first main draw Grand Slam win at Australian Open 2022 will be a building block for even bigger things. 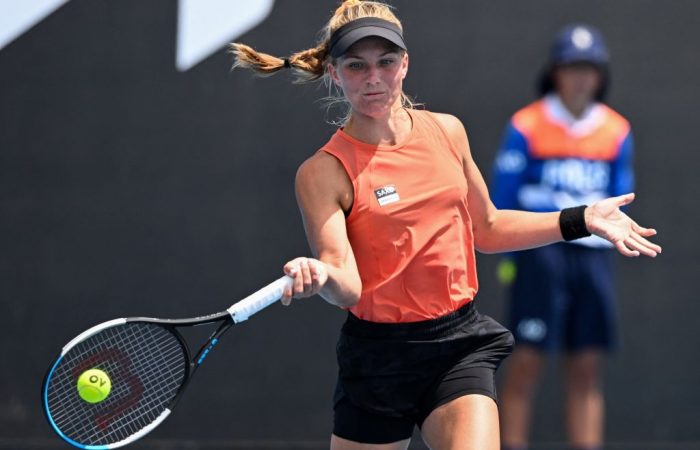 A desire to challenge herself and raise the bar of expectation is driving Australia’s Maddison Inglis as she looks to build on the biggest win of her career.

The 24-year-old West Australian was outstanding in the first round of Australian Open 2022, downing 2021 US Open finalist Leylah Fernandez in straight sets to secure her first-ever main draw Grand Slam victory.

“I had thought of that moment for a long time. It was just pure happiness. It was an amazing moment. I’m really so happy I could have it here in Melbourne with all my friends and family there,” Inglis said after the match.

The World No.133 has challenged herself over the last 12 months to both play and attempt to qualify for more WTA events, having been a regular on the ITF circuit in previous years.

Since the start of 2021, Inglis has played in 17 main draw WTA events after contesting just four in the two years prior.

🇦🇺 “It was just pure happiness.”

Maddison Inglis comes away with her first major win, and she couldn’t be happier 🤗#AusOpen • #AO2022 pic.twitter.com/oOfFNBstSS

“I pushed myself last year to play a lot of the WTAs because I’m used to playing the ITFs, winning a few matches there, just playing at the lower level a bit,” she explained after her win over Fernandez.

“I thought to get to the next stage I’m going to have to play these bigger tournaments and the better players. I think that definitely helped me going into this event.

“I felt really comfortable out there at this level, and I have to push myself to do it more and more.”

Inglis will try and strike the balance this season between high level exposure, and regular matches to help her build confidence and form.

“There’s still benefits in playing some ITFs for me. I find that I’m playing my best tennis when I have a lot of matches under my belt. I will do a mix, still some ITFs, a few WTAs. I will schedule around what I can get into and how I’m feeling,” she explained.

Australian players have done it particularly tough during the pandemic, with extended time on the road, and on the biggest day of her career, family wasn’t far from Inglis’s mind.

“I was talking to mum yesterday. We started tennis just as a bonding thing with my mum and I. She said the other day, ‘I’m so proud of you that you’re playing in the Australian Open. It’s amazing’.

“I think sometimes you just have to look back and think of the journey and the fact you are at one of the biggest tournaments in the world.

“The last couple years have been tough for everyone. I know that a lot of people are in worse situations than I am. But it is hard not to see your family. I was flying back from a seven-month trip, and I couldn’t get into Brisbane where I live, or Perth where my family is.

“I was so lucky I had a really good friend in Melbourne who took me in for two months. Hopefully I can get back to Perth sometime this year.”

Inglis’s victory over the world No.24 Leylah Fernandez was a dominant one, with the Australian calling on previous encounters with the Canadian.

“I knew it was going to be obviously a different Leylah out there. But, yeah, I just kind of stuck to what I have been working on, my game plan.”

Inglis will now take on 20-year-old American Hailey Baptiste in the second round.