De Minaur off to a winning start at Australian Open 2022 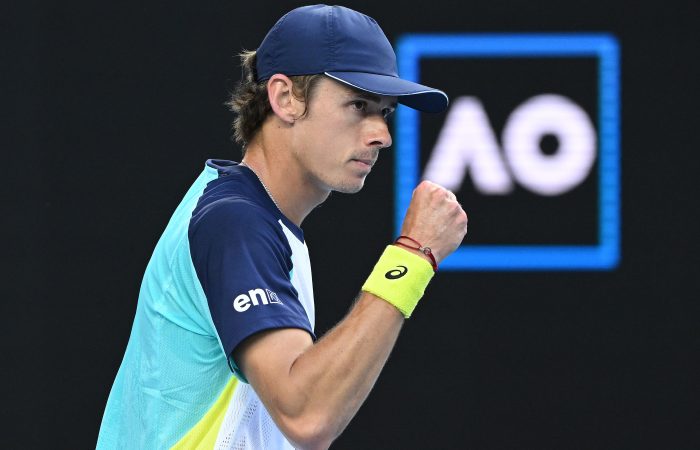 Alex de Minaur has progressed to the second round at Australian Open 2022 with a brilliant display at Margaret Court Arena this evening.

Apart from a 15-minute drop in level in the opening set, De Minaur was in total control, both at the net and from the baseline, in a 3-6 6-3 6-0 6-3 victory against 19-year-old Italian Lorenzo Musetti.

“It doesn’t get much better than this. Playing in front of my home fans, there is no place I’d rather be,” De Minaur said on court after his victory.

The world No.42 was at his tenacious and energetic best in the ATP Cup earlier this month, and all of that court speed and clever decision-making was on display in the first 15 minutes of tonight’s match.

He landed the first break and raced to a 3-1 lead, before the young Italian lifted against the tide to peel off five straight games and take the opening set.

World No.60 Musetti famously reached the fourth round at Roland Garros last year, where he took two sets off world No.1 and eventual champion Novak Djokovic.

De Minaur found his groove again early in the second set, breaking serve and racing to a 4-1 lead and 0-40 on the Musetti serve, on the back of winning 11 consecutive points.

Musetti fought back once more, but this time De Minaur had the answers and closed the set out 6-3.

Having only won two points on his second serve in the first set, De Minaur won all of them in the second.

The third set was an absolute procession, with De Minaur not dropping a single point on serve and only five points in total, as he took it in just 18 minutes.

On the verge of being overwhelmed, Musetti tried to fight back in the fourth set, saving several break points before eventually cracking, as De Minaur piled on the pressure with aggressive ground strokes.

The break of serve came in the fifth game and that was enough for the 32nd seed to close the deal and record a strong four-set victory.

After losing five games in a row in the opening set, De Minaur would win 18 of the last 24 – including six breaks of serve.

“He’s a very talented player, he’s gone to five sets with Novak, so I was happy I was able to turn it around after the first set and play some good tennis,” De Minaur said.

Throughout the victory, De Minaur would create 21 break point chances to just six, and would win 28 points at the net, also to just six.

“I think the most important thing is I stayed positive,” De Minaur said. “It’s positive vibes only for 2022.”

This is De Minaur’s fifth Australian Open campaign, with third round runs in 2019 and 2021 his best previous results.

His second-round opponent on Thursday will be 26-year-old Kamil Majchrzak of Poland, who is ranked No.107.

“I’ve hit with him before, he’s very talented and he’s played some great matches at the ATP Cup so another tough one for sure,” De Minaur said.

De Minaur is the third Australian man to score a first-round victory on day two, joining Nick Kyrgios and wildcard Chris O’Connell in the winners’ circle.