As she prepares to stage her final singles campaign at AO 2022, the enduring Sam Stosur continues to build a remarkable legacy in the sport. 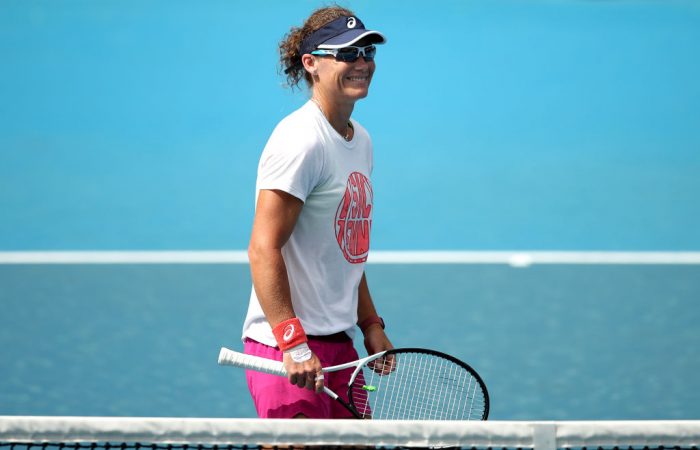 Two decades and many matches have passed since Sam Stosur made her Grand Slam debut at AO 2002.

But exactly 20 years on, she still remembers a critical lesson from that match.

“I remember that I played in main draw against Greta Arn and if I’d won, I would have had to play Martina Hingis in the second round,” said Stosur as she prepared for Australian Open 2022.

“I was so excited and nervous to play Martina Hingis, I didn’t even win my first round against Greta!

“That in itself was a great lesson, because it was like ‘okay, you cannot play your second round until you play your first round. Everything is irrelevant except for this match’.”

The most important lessons were in fact entrenched from the start for the 37-year-old Stosur, who will contest her last professional singles tournament in Melbourne this fortnight.

Set to make her final singles appearance at #AO2022, Sam Stosur is determined to make it an enjoyable one 🤗#GoAussies pic.twitter.com/UOT8FyO2XG

Asked what would provide her with the most pride when she looks back on her long career, neither Stosur’s Grand Slam titles (one singles, four women’s doubles and three mixed doubles) nor her career-high rankings (Stosur peaking at No.1 in doubles in 2006 and No.4 in singles in 2011) rated a mention.

“I think just knowing I did everything I can to be the best player I can be. And giving 100 per cent, doing all those little things,” responded Stosur, who famously defeated Serena Williams to win the 2011 US Open and was runner-up at Roland Garros in 2010.

“I’ve always gone out there and respected every opponent and can walk off knowing, ‘okay that was good today’. I think that’s the best thing that you can look back on – knowing you’ve done everything you can to be a good player, but also a good competitor (and) a good sport.

“I still remember one of my coaches early on (saying) ‘you always shake hands, you always do your best and respect everyone there’. I think that sort of mentality has always been ingrained in me.”

Those role model qualities have flowed through the next generation of Australian players, with world No.1 Ash Barty among those who speak passionately about Stosur’s positive influence on her career.

“She’s an Australian champion, plain and simple. She has set the tone for us Aussies as tennis players for years and years,” Barty smiled.

“I think the way she’s been able to pave the path and guide so many Australians, so much of the Australian tennis youth, has been nothing shy of remarkable. She’s our champion. We love her to bits.”

Stosur is humbled, yet clearly delighted, to inspire other Australian players. “If you can pass on one per cent of something to somebody else, I think that’s just a really special place to be,” she said.

While admitting that a final singles campaign in Melbourne is likely to be emotional, the hardworking Queenslander has approached this Australian Open like any other event.

> READ: Stosur – “I just really want to enjoy the moment.”

Alongside the many Australian supporters who’ll be watching as Stosur takes on fellow wildcard Robin Anderson – a world No.169 from America – will be parents Tony and Diane, as well as brothers Daniel and Dominic.

“It’s certainly going to feel a bit different maybe when I’m playing. You look up into the stands, all of that stuff,” Stosur noted of her final singles campaign.

“But at the end of the day it’s all on my terms. I think it’s something that I feel really good about.”

Stosur, who will continue her doubles partnership with China’s Zhang Shuai, is equally happy that as she winds down her career, Australian tennis is in an undeniably good place.

“Obviously Ash leading the way, it goes without saying. But you’re not necessarily doing great as a country if you’ve only got one player, even if they’re No.1 in the world.

“But I don’t think that’s where Australia is. We’ve got lots of good players and there’s a huge amount (ranked) between 100 and 200,” said Stosur, who notes the recent progress that players including Ajla Tomljanovic, Daria Saville and Storm Sanders have made.

As she watches those players climb up the rankings, Stosur is equally pleased that Australian women set a standard in other ways.

“I love training with them. They’re a great group of players and people mostly,” she commented. “It’s always a real pleasure to be on court with them.”