Ash Barty: “The role hasn’t changed … I’m just being me”

Ash Barty is well placed to add an Australian Open singles title to her Grand Slam record, but it’s business as usual for the world No.1. 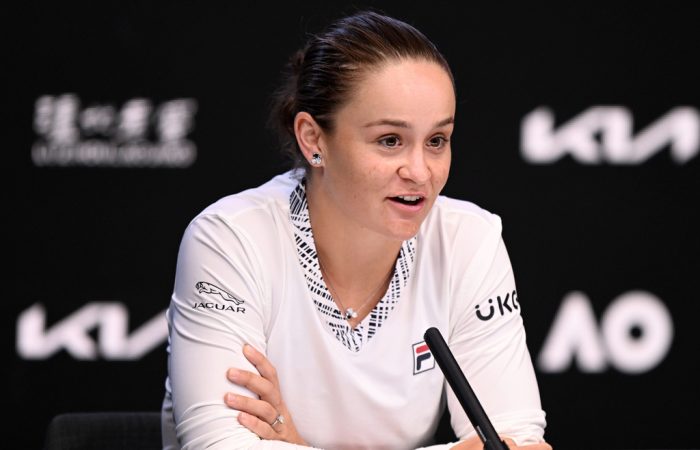 World No.1 Ash Barty is feeling fresh and confident leading into another Australian Open campaign, as she looks to build on deep runs at the tournament over the past three years.

“Obviously it was really nice to get a few matches in Adelaide last week and kind of roll on some momentum and know that I’m coming in here playing well.”

Barty made the Australian Open quarterfinalist in 2019, lost a tight semifinal to Sofia Kenin in 2020, and reached the quarters again last year.

Chris O’Neill was the last Australian woman to win an Australian Open singles title in 1978 but Barty is unfazed by the external noise surrounding her chance to make history.

“I can’t do any more than I can try,” she commented. “That’s all I can do. If it doesn’t happen, it doesn’t happen. I just have to hope that everyone understands that I’m giving it my best crack.

“It doesn’t always work out exactly how you want to. But you go about it the right way, you do the right things and try and give yourself the best chance, that’s all you can do.

“That goes for all the other Aussies as well, everyone else in the draw.”

Find someone that smiles at you the way world No.1 @ashbarty smiles at life 🤩

With three consecutive trips to the last eight at Melbourne Park, Barty reflected on some tough losses, and the personal growth she has experienced through those moments.

“You have to be able to take learnings from every experience. That’s certainly been no different here in Australia. I’ve had some pretty tough lessons, but also some incredible moments.

“A few stick out in my brain more than others, both the tough ones and the good ones. I’ve been so extremely fortunate here in Australia to have had the opportunity to learn so much.”

This year marks the third in a row that Barty has begun the season as the World No.1, but it’s a mantle that changes nothing for the humble Queenslander.

“The role hasn’t changed. The comfort level is exactly the same, because for me, I’m just being me,” she said.

“Regardless of the number next to my name, that doesn’t change the way we approach it. Particularly here in Australia, it’s exciting. I get to play in front of incredible fans, my family, which is amazing. It feels like an eternity since I played here at home.”

Last week Barty won the Adelaide International for the second time and headed straight to Melbourne to prepare for the Australian Open.

“We played a lot of matches in Adelaide. It was nice to play plenty of singles and doubles, and after chatting with my team in Adelaide, it was the right decision for us to come here,” Barty explained.

“It’s been a very normal week in the sense of doing what we would usually do. We had a couple of extra days off, then back into training in our normal routine. Nothing has changed for us. It is nice to be back here in Melbourne.”

Barty’s 2021 season ended after the US Open, and the two-time Grand Slam champion feels the extended break has her refreshed and ready to launch a new campaign.

“Yeah, it was a tough decision. It was one that I spoke to my team a lot about. Ultimately, I felt like I’d had a fantastic year. I knew that for me to give myself the best chance to start well here in Australia was to go home and rest.

“I have absolutely no regrets. Ultimately, we had a fantastic year. We were able to come home, do the necessary quarantine, rest a little bit, catch up with family and start a pre-season again.”

Barty’s Australian Open 2022 campaign begins against 32-year-old Ukrainian Lesia Tsurenko, a qualifier who peaked at world No.23 in 2019.

“Always a tough one against a qualifier, particularly someone who has been so successful in the past. She obviously knows how to win big matches; she knows how to navigate through some tough times,” Barty said.

“Having played qualies over the last week with two or three matches, she’s used to the conditions.

“I look forward to it come Monday. We go out there and see how we go.”