World No.1 Ash Barty overwhelms Elena Rybakina in a 64-minute Adelaide International final to triumph at the tournament for a second time. 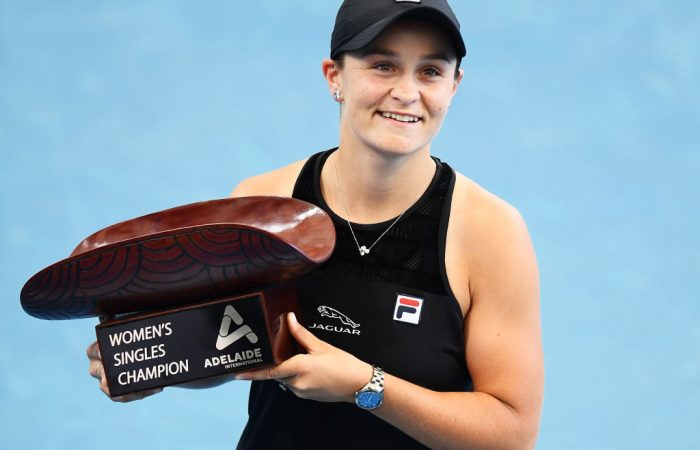 Ash Barty loves being at home in Australia and loves winning trophies.

The world No.1 spectacularly combined both as she defeated Elena Rybakina 6-3 6-2 in the final of the Adelaide International to win the title for a second time.

Victory over the world No.14 from Kazakhstan marked Barty’s 21st win in her past 24 matches on Australian soil.

“I feel comfortable all around Australia. I’m very lucky to get support all around the nation,” Barty smiled.

“It’s just exciting to be back playing tennis here in Australia. It feels like an eternity since I have been back on Aussie soil playing.”

Contesting her 20th WTA singles final, the Australian appeared nerveless as she relied on her solid serving and signature variety to overwhelm Rybakina in 64 minutes.

“It’s really exciting,” Barty commented. “We’ve obviously had a brilliant week, been able to work progressively through each match I got better and better.”

The moment Ash Barty won WTA singles title no. 1️⃣4️⃣. Is this the best she's looked coming into the grand slam? 👀

That was particularly true in the final against Rybakina.

Saving break points in the seventh game of the 29-minute opener was the only hint of trouble for the tournament’s top seed.

Doing so easily highlighted her ability to withstand pressure and then quickly apply it. She broke Rybakina’s serve with her first breakpoint opportunity in the following game and easily served out the set.

Improving with every match and every set played in the South Australian capital, Barty broke in the first game of the second set and soon established a 6-3 4-0 lead.

Smoothly maintaining momentum to close out an emphatic victory, Barty finished the match with six aces and 17 total winners.

There was another impressive stat as Barty recorded 35 consecutive service holds after recovering from a set and a break deficit against Gauff.

“I probably felt like overall this week my serve has been a real weapon … to go a few matches unbroken is really good,” said Barty, explaining how that positively impacted her overall game.

“All in all this week I felt like I was able to look after my service games well, which then allowed freedom for the rest of my game.”

Just a week into the new season, the numbers are adding for the 25-year-old Barty, who will amass her 110th week at world No.1 next week.

With some observers suggesting that Barty is displaying her best form ever, it follows that many suggest she’ll also add a third Grand Slam title in Melbourne later this month.

“I feel good leading up to an Australian Open like I have every year,” said Barty, who achieved her Grand Slam breakthrough as the 2019 Roland Garros champion and was the winner of Wimbledon last year.

“So we take it for what comes and what it is, move on, try and do the best that we can in every opportunity, whether that’s here in Adelaide or it’s in Melbourne.”

In the meantime, there’s another milestone for Barty to celebrate.

Hours after winning the singles title, the world No. 1 combined with her good friend Storm Sanders to lift the trophy in doubles too.