After a rollercoaster 2021 season, Matt Ebden is aiming to kick off his 2022 Grand Slam campaign by winning through Australian Open qualifying. 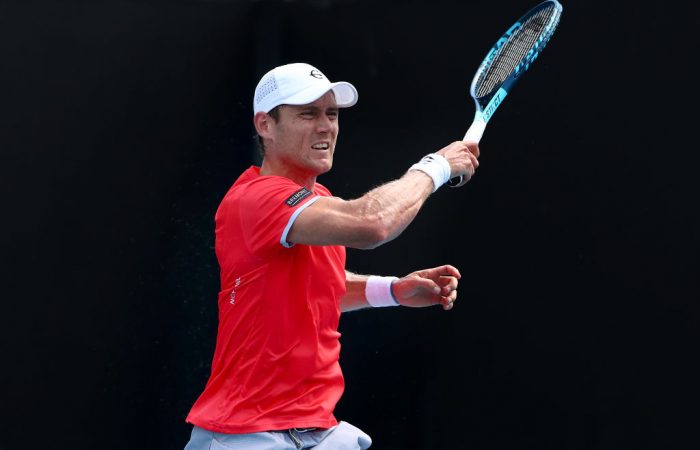 The 2021 tennis season threw up challenges for all players on the tour, but few rode the rollercoaster quite like Matt Ebden.

Injury, COVID dramas and news that he was to become a father were woven around some notable Grand Slam doubles performances for the 34-year-old.

Ebden’s year started strongly, with a run to the singles quarterfinals in the ATP 250 event in Singapore in February followed by a semifinal appearance at Marseille in March.

During that Marseille run, he downed Karen Khachanov (then ranked world No.20) and was challenging world No.2 Daniil Medvedev before injuring his leg.

“Coming into this year with singles I definitely feel like my level is still there,” said the former world No.57 during Australian Open 2022 qualifying this week.

“I was getting wins in Singapore and carried that into Marseille before I got a little leg strain that cost me a few weeks.”

After working back from that injury, Ebden’s season hit a snag as he was about to start the North American swing in July.

“On leaving the Wimbledon bubble, we were about to fly to Newport, which has been one of my best tournaments over the years, and we got sent back to our room to wait for a phone call,” he related.

“They called us and said my wife Kim has COVID. Somehow, someone at Wimbledon had given Kim COVID.

“We had two weeks in isolation in London in the middle of the season, which is far from ideal, and as a result I missed Newport.

“That quarantine and the repeated isolation can do things to your body that you don’t quite understand, and it can lag on for a few weeks. That COVID delay ultimately cost me at least six weeks.”

Having missed a lot of time with injury over the previous two years, Ebden’s ranking dropped, and it was a difficult mountain to climb as he tried to work his way back.

“Everyone had protected rankings from the year before due to the pandemic, but I had been injured so I had no protection.

“Working your way back up to the top 100 is really hard as a result. I missed entry to tour events and Challengers, plus half of the Challenger events were missing.

“Even this year there are still hundreds and possibly thousands of points missing on the schedule.

“COVID has really affected things. It’s cost me most of my last two seasons of singles, and at 34 years of age, that’s not ideal.”

Ebden enjoyed an excellent year on the doubles tour, reaching the quarterfinals at both the Australian and US Opens, as well as a final in Singapore, and semifinals in Lyon and Marseille.

“I actually used doubles to hedge my bets and make sure I got entry into tournaments, given my singles ranking might not get me a spot.

“To leave the year with two Grand Slam quarterfinals was terrific, and I’ll be playing doubles with Max (Purcell) here again.”

Adding to the 2021 rollercoaster, in the same week that Ebden’s wife Kim contracted COVID, the couple received news that they were expecting a baby.

“We are super excited to have a little boy coming in February,” said Ebden. “I will definitely miss some weeks after the Open and will prioritise being at home.

“Kim is really keen to travel though, after a few months when the baby can come with us.

“I’ll likely travel and fly home a few times rather than staying away at the start of the season too much.”

After a whirlwind year, Ebden is confident he can climb the rankings ladder again in 2022.

“I still feel like I’m moving really well. Speed-wise and agility-wise. I’m lucky with my body, it’s not really an issue.

“I don’t feel like I have any excuse not to pursue singles at the moment. I definitely don’t feel 34.

“I feel with the rankings, the limitations in the schedule and the COVID situation, it was taken out of my hands a little bit.

“It is sometimes hard to remain positive, but I’ll just stay in the present and do the best I can.”

Ebden today takes on world No.117 Norbert Gombos of Slovakia in the final round of qualifying for a place in the main draw of Australian Open 2022.