Thanasi Kokkinakis battles to a three-set win over countryman Aleksandar Vukic to progress to a second straight semifinal in Adelaide. 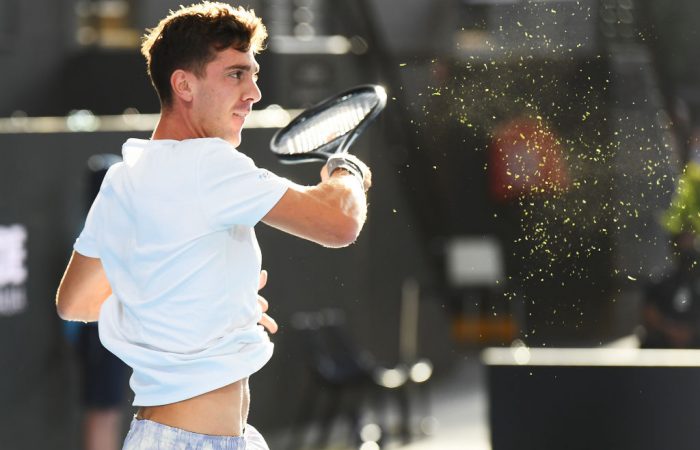 Persistence is a critical quality for player who has endured as many interruptions to his career as Thanasi Kokkinakis.

It proved equally valuable when the South Australian outlasted Aleksandar Vukic in the quarterfinals of the Adelaide International 2 tournament.

In a frustrating first half of the encounter, Kokkinakis surrendered 11 straight breakpoints – nine in the first set and two in the second – before at last seizing momentum and after two hours and 16 minutes, his 6-7(5) 6-3 6-1 victory.

It followed a three-set win over No.2 seed John Isner yesterday, in which Kokkinakis also surrendered five breakpoint opportunities in the first set before the match was determined in tiebreaks.

Another comeback win 🙌@TKokkinakis through to his second consecutive #AdelaideTennis semi-final after a 6-7 6-3 6-2 win over fellow countryman Vukic! pic.twitter.com/Qzjda34z2W

“Don’t remind me,” the South Australian smiled, when reminded of the breakpoint battle in his on-court interview.

“He was coming up with some good serves, I was being a little bit tentative.

“I was trying not to lose my marbles completely but when the two went in the second set, so I was 0 and 11, I was really about to lose it.”

But helped by some eyedrops from the trainer and a break off court after the one-hour, 67-minute opener, a disciplined Kokkinakis maintained composure.

The turning point came when he at last secured the break in the eighth game, and as an appreciative Adelaide crowd roared their support, Kokkinakis took control of the match.

“I just tried to make returns, put the ball in play and give myself a chance,” Kokkinakis related.

“Thankfully I took one (breakpoint) and eventually I just let it go and started playing good tennis from the second set.”

Firing 17 aces and easily saving the lone break point that he faced, the 25-year-old was delighted that his own serve proved a feature of the match.

“I’m stoked,” said Kokkinakis, thanking his team for helping him retain his signature weapon after overcoming a serious shoulder injury earlier in his career.

“It’s been a long five or so years. I couldn’t be happier with the way I’m serving and giving myself a chance every match. Hopefully I can keep it up.”

Kokkinakis will next aim to do so against No.4 seed Marin Cilic, as he aims for a place in a second ATP-level final and his first since he was runner-up to Sam Querrey at Los Cabos in 2017.

“I’m going to have to play well. I’m going to have to take more chances than I did today, especially in the first set, if I want to give myself a chance,” said Kokkinakis, whose motivation couldn’t be higher as he aims to improve on his semifinal appearance last week.

“Hopefully I can ride the wave,” he said. “Ride the support again and keep playing some good tennis, because I’m love it here (in Adelaide).”