Hitting peak form in his home city of Adelaide, Thanasi Kokkinakis defeats John Isner in a marathon to set a quarterfinal with Aleksandar Vukic. 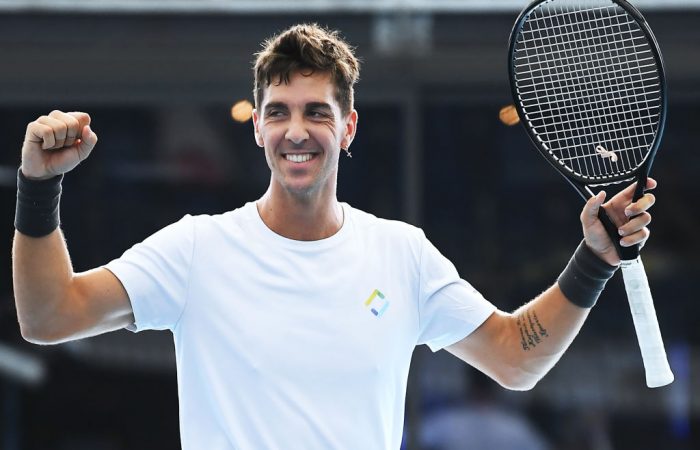 There’s clearly no place like home for a rejuvenated Thanasi Kokkinakis.

A week after the South Australian reached his first semifinal in almost five years at the Adelaide International, the 25-year-old local has progressed to the quarterfinals of the second tournament.

He did so with a hard-fought victory over No.2 seed John Isner, in which Kokkinakis required all his resilience against the big-serving American.

It marks the first-time that Kokkinakis has recorded back-to-back ATP-level quarterfinal appearances. It’s also his biggest win since he upset Roger Federer, ranked world No.1 at the time, at 2018 Miami.

“I’m stoked. Obviously I knew going into it, it was going to be a super tough match. One of the best servers if not the best ever. Got to try to create opportunities when you can,” he said.

With both players known for their big serving, it was unsurprisingly the standout statistic of the pair’s first meeting, with Isner recording 22 aces and Kokkinakis a handy 15.

Breakpoints – or the absence of them – were also a factor. While Kokkinakis would lament the five he surrendered on Isner’s serve in the hour-long first set (three in the fifth game and two in the 11th), his own solid serving meant he faced none of his own.

Neither player managed a single break point in the final two sets, but Isner’s energy appeared increasingly diminished as Kokkinakis found his range in both tiebreaks.

It sets up a tantalising encounter with Aleksander Vukic, who progressed to a first ATP-level quarterfinal with a win over American Steve Johnson.

Kokkinakis anticipates a challenging match against Vukic, who has a similarly big-serving game.

“He’s had two good wins playing some big servers the last couple days. Vuc came from college. He’s improved a lot the last sort of year or so,” he said.

“He’s a good dude. We spent a bit of time out in London when we were allowed outside the bubble, we had some nights out. We know each other pretty well. He’s a good guy and should be a tough match for sure.”

Vukic is equally excited for the all-Aussie encounter. “Thanasi has been playing great. I’ve spent a lot of time with him this last year,” he said. “He went through some ups and downs like we all did.”

There was also an impressive result for local players in the doubles, with wildcards Aaron Addison and Thomas Fancutt upsetting top seeds Rajeev Ram and Joe Salisbury in a three-set battle.

The Australian duo now face Ariel Behar and Gonzalo Escobar, from Urugay and Ecuador respectively, in the quarterfinals.