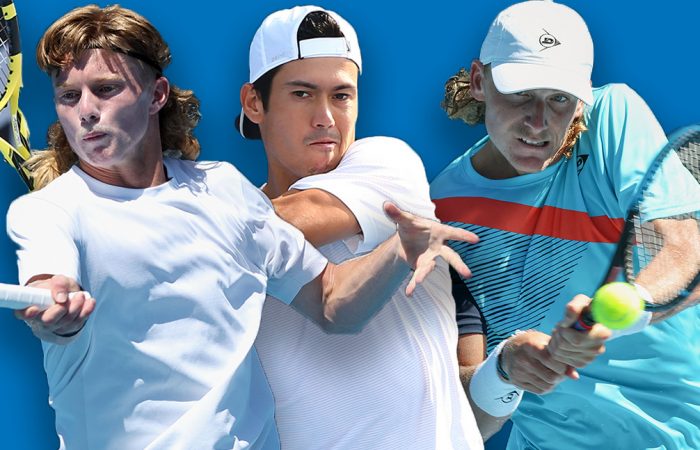 [WC] Kimberly Birrell (AUS) v [22] Ekaterine Gorgodze (GEO)
Women’s qualifying singles, second round, Court 3, first match (from 10am AEDT)
Birrell is enjoying an impressive comeback after a 10-month lay-off due to a right elbow injury. The former world No.154, who is currently ranked No.664, is proving she has the game to challenge for an Australian Open spot. “I know if I can play the way I want to play, I can win,” she said after her first-round victory on Monday. The 23-year-old from the Gold Coast can also take confidence from a winning record against world No.143 Gorgodze, who she beat on Australian hard courts three years ago. The 30-year-old left-handed Georgian is enjoying a career-best Australian Open, having lost in the opening qualifying round in her three previous appearances.
Head-to-head record: Birrell leads 1-0
Last meeting: Birrell won 2-6 6-3 6-3 (Launceston, 2019)

[WC] Dane Sweeny (AUS) v Timofey Skatov (KAZ)
Men’s qualifying singles, second round, Court 8, first match (from 10am AEDT)
As well as breaking into the world’s top 500 in his first full season on tour, Sweeny also gained a new perspective. “You get to learn so much about yourself, on and off the court,” said the 20-year-old, who is aiming to reach the AO final qualifying round for the second consecutive year. Among his biggest lessons, was the benefit of playing pressure-free. “I expect a lot out of myself and I think that can really hinder my performance,” noted the world No.486. “I’m trying to focus on just doing the best I can and not worry about the result too much.” Sweeny will take this approach into a second-round clash with world No.255 Skatov, a 20-year-old former world No.1 junior contesting his first Grand Slam.
Head-to-head record: First meeting

Max Purcell (AUS) v [18] Jiri Lehecka (CZE)
Men’s qualifying singles, second round, Court 7, second match
World No.174 Purcell is a proven performer at the Australian Open, qualifying in 2020 and advancing to the men’s doubles final that same year. The 23-year-old from Sydney is excited to be competing at his home Grand Slam again. “I’m itching to get some more matches,” he said. Purcell admits he knows little about world No.143 Lehecka, who is contesting his first AO. The 20-year-old Czech halved his ranking in a breakout 2021 season, winning two ATP Challenger titles from four finals appearances. “It’s actually nice getting to play someone I don’t know, there’s no expectations there or anything,” Purcell said. “I can just feel into the match, rather than going in with a particular plan.”
Head-to-head record: First meeting

[WC] Philip Sekulic (AUS) v Dmitry Popko (KAZ)
Men’s qualifying singles, second round, Court 8, second match
Queensland teen Sekulic made an impressive Australian Open debut, beating world No.234 Matthias Bachinger in the opening round. Now he is set to challenge world No.177 Popko, a 25-year-old from Kazakhstan. “I’m confident in my game. I know if I’m playing well, I can beat a lot of these guys,” said the 18-year-old wildcard, who is currently ranked No.992 and contesting only his fifth professional-level event. Several pre-tournament practice sessions with world No.4 Stefanos Tsitsipas have also boosted Sekulic’s confidence. “I think they really helped me,” he said. “(Tsitsipas) hits the ball really well and I was able to get into a good rhythm.”
Head-to-head record: First meeting

[WC] Taylah Preston (AUS) v Jang Su-jeong (KOR)
Women’s qualifying singles, second round, Court 3, third match
Preston is the youngest player contesting Australian Open qualifying this year and is proving she is one to watch. After scoring her first Grand Slam-level win yesterday, the 16-year-old from Perth’s self-belief is soaring. “This opportunity is a very big one. I want to make use of it and do the best I can do,” said the determined world No.1184. “The main goal here is to qualify.” Preston’s next challenge is to beat world No.212 Jang, who eliminated former world No.5 Sara Errani in the opening round. The 26-year-old from South Korea has matched her career-best Australian Open result and is also aiming to qualify at a major tournament for the first time.
Head-to-head record: First meeting

[WC] Rinky Hijikata (AUS) v [30] Damir Dzumhur (BIH)
Men’s qualifying singles, second round, Court 8, third match
Hijikata has progressed to the second round in Australian Open qualifying for the third consecutive year and is now aiming to reach the final round for a first time. The 20-year-old’s confidence is growing, aided by a successful qualifying campaign at last week’s Melbourne Summer Set where he beat two top 110-ranked opponents. “I’m feeling good,” Hijikata said. “I feel like I’m a lot more comfortable at this level now.” The world No.358 faces another test in the second round against 29-year-old Bosnian Dzumhur. The experienced world No.161 is contesting his 10th Australian Open and achieved a career-high ranking of world No.23 in 2018.
Head-to-head record: First meeting

Jason Kubler (AUS) v [12] Tomas Martin Etcheverry (ARG)
Men’s qualifying singles, second round, Court 3, fourth match
Perseverance is a defining quality of Kubler’s career, with the former world No.1 junior overcoming numerous serious injuries to chase his tennis dreams. Now aged 28, Kubler is as determined as ever to earn an Australian Open main draw spot. Standing in his way is 22-year-old Etcheverry, a towering Argentine at a career-high ranking of world No.129 and looking to advance to the final qualifying round at a major tournament for the first time. World No.203 Kubler does have a clear edge in experience in this match-up. The Brisbane local has been ranked as high as world No.91 and made three previous Australian Open main draw appearances.
Head-to-head record: First meeting

Marc Polmans (AUS) v [17] Joao Sousa (POR)
Men’s qualifying singles, second round, Court 3, fifth match
For the hard-working Polmans, the challenge of qualifying for his home Grand Slam is one he is happy to embrace. “I’m going to do my best to get through as many matches as I can,” said the 24-year-old Melburnian. “I’m just happy to be playing in the Australian Open, one of my favourite events of the year.” The world No.195 did successfully qualify at Wimbledon last year, providing extra confidence. Polmans faces the experienced Sousa in the second round. The 32-year-old from Portugal has been ranked as high as world No.28 and has advanced to the Australian Open third round on three previous occasions (in 2015, 2016 and 2019).
Head-to-head record: First meeting