Ash Barty in a happy place at Adelaide International

Ash Barty is delighted to return to a successful setting in Adelaide, where she faces Coco Gauff in her first singles match of the 2022 season. 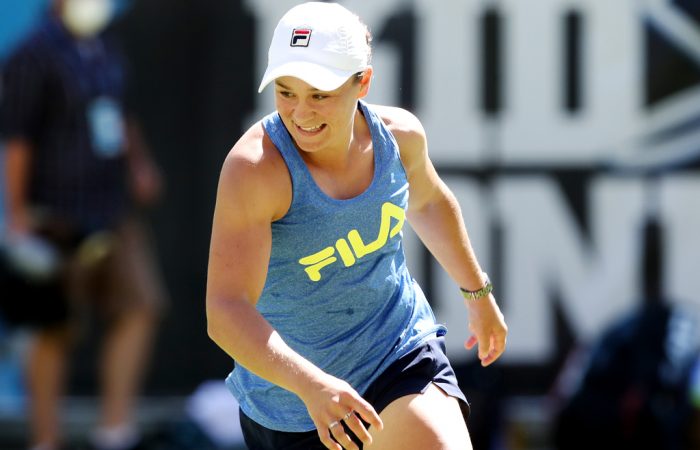 World No.1 Ash Barty is clearly in a happy place as she launches her 2022 season as No.1 seed at the Adelaide International.

As the setting for her first WTA title on home soil in 2020, the tournament also provided a springboard for a career-best performance at the Australian Open, where Barty was a semifinalist.

“Obviously we’ve got some good memories playing here. It’s nice to be back,” said Barty.

“It’s the start of the Aussie summer. It’s nice to be back in tournament mode, see some girls around, see some faces around. For a few of the girls, I haven’t seen in a long time.”

The good vibes have been showing as she warms up for her first singles outing at The Drive, a playful Barty incorporating football into her training sessions and was all smiles as she combined with Storm Sanders to claim an opening-round win in the doubles yesterday.

There are, of course, other reasons for the Queenslander to kick off a new season in high spirits.

In 2021, Barty constructed a personal-best season that featured a tour-leading five titles, including her long-awaited dream of triumphing at Wimbledon.

Claiming year-end world No.1 honours for a third-straight season, she also amassed more than 100 weeks in top position.

While an extended off-season provided time to reflect on those milestones, Barty was arguably even more grateful for the opportunity to recharge with her family in Brisbane.

“It was obviously nice to have some time to reflect with my family and see my family after what was an enormous year,” said the 25-year-old, who played the last of 50 matches for the season at the US Open in September.

“We probably spent two or three weeks where it was pretty low-key, just catching up with everyone as best we could.”

Preparing for a second-round encounter with Coco Gauff, Barty understands that competition is always intensifying. She notes that both rising stars and veteran players dominated at various points of the 2021 season.

“Genuinely there is really good depth and you have to bring your best time and time again to be able to compete with everyone and give yourself a chance to win the big titles,” she pointed out.

Still, it’s a challenge that the hard-working Barty relishes.

“It’s continuing to try to work on my game and better every facet of my game, whether it’s how I hit a specific forehand, when I use a shot. It’s all about using that in matches correctly,” she related of areas in her game she targeted ahead of the Australian summer.

“A lot of that is match awareness, as much as being able to strike a tennis ball. It’s something that is a challenge that I love.

Barty’s immediate focus is on tonight’s encounter with 17-year-old Gauff, who registered a win in their only previous match at Rome last year.

While it was one of only eight losses in the world No.1’s remarkable season, it also came with an asterisk, the Australian leading 6-4 2-1 when an elbow injury forced her retirement.

There were promising signs as Barty and Sanders ousted Gauff and Caty McNally in the doubles yesterday – not that the relaxed world No.1 is placing too much pressure on herself in the new season.

“I think you just need to enjoy that and work your way through it in the first couple weeks, because not often are you playing your very best tennis right at the start. You have to work your way in, earn that right,” said Barty.

“I’m looking forward to that challenge starting here in Adelaide of trying to find my groove. You know, really enjoy being out on the match court again.”