With a third quad wheelchair singles title secured at the US Open, world No.1 Dylan Alcott also makes history as the first man in tennis to win a Golden Slam. 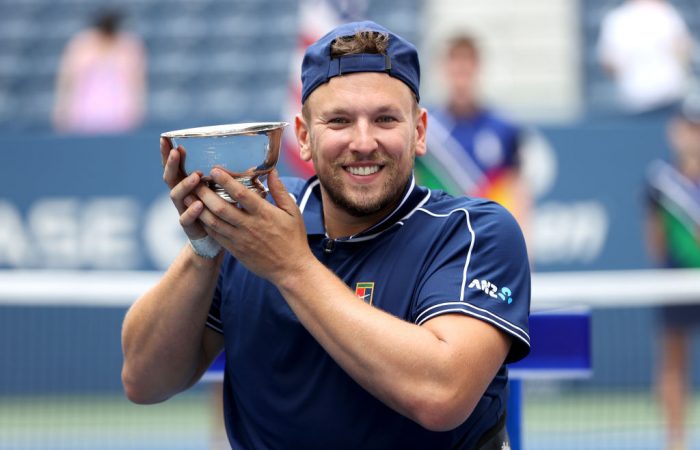 If Dylan Alcott has played his last match at the US Open, the world No.1 has finished on the ultimate high note.

Last weekend, he also claimed a second consecutive gold medal at the Paralympic Games in Tokyo.

“I can’t believe I just won the Golden Slam,” said an emotional Alcott as he was presented with the trophy at Flushing Meadows.

After a two-and-a-half hour semifinal win over Vink at the Paralympics, Alcott experienced an easier day in the US Open final.

He required an hour and 15 minutes to defeat the US Open debutante and paid a fitting tribute to the 18-year-old’s rapid rise in professional tennis.

“You’re a really good tennis player but you’re an even better person,” said Alcott of Vink, who combined with countryman Sam Schroder to defeat Alcott and Davidson in yesterday’s doubles final.

“Without you out here dominating, I don’t think I would have pushed myself so hard – so I really appreciate our friendship and our competitiveness and you’re probably going to win 10 US Opens.”

It was a second US Open singles title for Alcott, also a winner at the 2015 and 2018 tournaments.

It was also a 15th Grand Slam singles title in total for the world No.1, who admitted that retirement is edging ever closer.

“I feel honoured and privileged to be out here on this court and I’m going to be up front – I don’t know if I’ll be back here, so I really appreciate everything.”

He especially appreciated that one of the biggest matches of his tennis career was contested on Louis Armstrong Stadium, underlining the impressive profile of wheelchair tennis.

“(It is) changing my life, changing Niels life but hopefully changing the lives of millions of people with disability around the world that they can see themselves on the big stage doing what they love,” said Alcott.

The world No.1, who has played a major part in that progress, appreciates the significance on many levels.

“I used to hate myself so much, I hated my disability. I didn’t even want to be here anymore,” he commented.

“Then I found tennis and it changed and saved my life.

“And now I’ve become the only male ever, in any form of tennis, to win the Golden Slam, which is pretty cool.”