Australian Sam Stosur has won her second US Open women's doubles title - and first in 16 years. 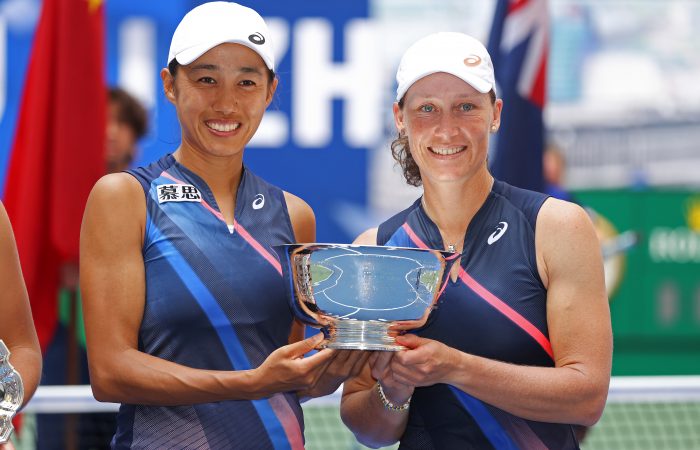 On the 10-year anniversary of Stosur’s memorable 2011 singles triumph at the US Open, the Australian is leaving New York with another Grand Slam trophy.

Stosur and China’s Zhang Shuai are the US Open 2021 women’s doubles champions, securing the title with a hard-fought 6-3 3-6 6-3 victory against American teens Coco Gauff and Caty McNally in the championship match in New York today.

It was a high-quality final, with just three breaks of serve throughout the one-hour and 54-minute battle.

Stosur and Zhang hit 39 winners to 37, with their experience proving telling against 17-year-old Gauff and 19-year-old McNally in the tense final stages.

A patriotic Arthur Ashe Stadium crowd tried to will Gauff and McNally to victory, but the Australian-Chinese combination showed nerves of steel under pressure.

They broke McNally’s serve in the eighth game of the deciding set, then Stosur calmly served out an impressive victory.

“It was just such a tight tussle the whole match, a few points here and there,” Stosur said. “We stuck together as a team, played aggressive, went for it as we always do, and it pays off.”

This is Stosur and Zhang’s second major title as a team, having also won the Australian Open in 2019 together.

It is Stosur’s fourth career Grand Slam women’s doubles title in total and her second at the US Open. She won her first alongside American Lisa Raymond in 2005.

This result extends Stosur and Zhang’s current winning streak to 11 matches, one of many impressive numbers stemming from today’s victory for the 37-year-old Australian.

This is the 12th time an Australian has won the US Open women’s doubles title in the Open era.

Stosur joins Margaret Court, Judy Dalton and Wendy Turnbull as the only Australian women to win multiple doubles titles in New York – and becomes the first to achieve the feat in almost four decades.

The former world No.1 also sets a new Australian record for longest span, at 16 years, between US Open women’s doubles titles.

“I think it’s just huge satisfaction to know what I’m doing, all the hard work, everything that you do day in, day out still pays off,” Stosur said.

“You can play in an amazing stadium in front of a great crowd, serve out the match for a Grand Slam title. Be like, ‘Yeah, I can do this’. That’s exactly what we play for, we love those moments. To have those opportunities is just the best. So thankful to still be out there competing, being able to play the way I am.”

World No.55 Stosur is projected to rise to world No.21 in the doubles rankings after her title-winning run and overtake Storm Sanders as Australia’s top-ranked woman.

But after four months on the road, Stosur now plans to end her season and return to Australia.

“It’s been a long trip. It’s been a hard trip. I wasn’t winning too many matches,” Stosur said. “Thankfully we were able to team up again together after the Olympics. Obviously we’re on a roll. Winning certainly makes everything feel a whole lot better when you’re away from home for such a long time.

“To be going home with this trophy just means the absolute world to me.”

It has been a special day for Australians in New York, with Dylan Alcott becoming the first man in history to complete a Golden Slam.

Alcott scored a 7-5 6-2 victory against Niels Vink of the Netherlands in the quad wheelchair singles final.