Barty books spots in US Open third round

World No.1 Ash Barty has continued her winning run in New York, advancing to the third round in the US Open women's singles competition. 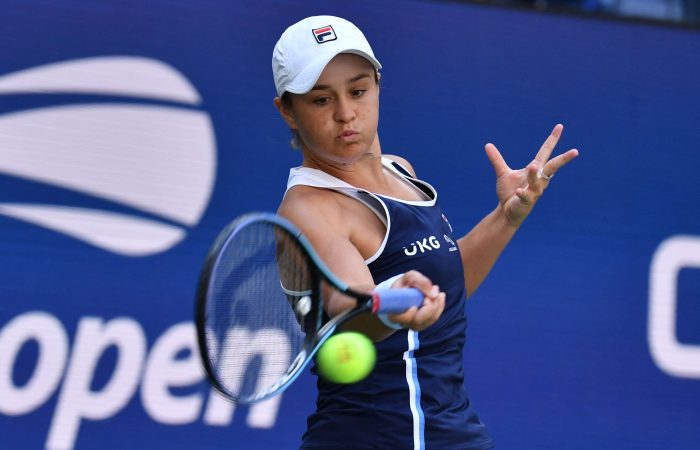 New York was lashed with wild and unpredictable weather overnight – but it was business as usual for world No.1 Ash Barty today, progressing to the third round in straight sets.

The 25-year-old Australian scored a 6-1 7-5 victory against world No.78 Clara Tauson at Arthur Ashe Stadium.

“Today was tricky I think, to navigate through that second set and just trust myself and hit out. But all in all, happy to be moving through to the third round,” Barty said.

After blitzing through the opening set, Barty was forced to work harder against the former world No.1 junior in a tighter second set.

“Credit to her, she was a little bit more aggressive in that second set. I got a little bit passive and just let my energy drop and allowed her back in,” Barty admitted.

The top-seeded Australian was able to dictate on serve throughout the 90-minute match, firing 11 aces and winning 80 per cent of first service points.

Barty returned well too, winning 52 per cent of points on Tauson’s service games. However, the reigning Wimbledon champion struggled to make the most of her break point opportunities against the 18-year-old Dane – converting only five of the 19 she earned throughout the second-round match.

But Barty proved to have too much firepower in the end, finishing with 33 winners to Tauson’s 14.

“I think chipping away in these first two matches has been good,” Barty said. “The tennis hasn’t been as clean as it was a couple weeks ago, but we accept that. We keep working and go back to the practice court tomorrow, and now we give ourselves another opportunity in the third round to try and rectify that.”

Barty will face 28-year-old American Shelby Rogers, a quarterfinalist in New York last year, in the third round.

It will be Barty’s sixth career meeting with world No.43 Rogers – and incredibly, their fifth this season. The world No.1 has won all of their previous matches. However, was pushed to three sets at the Melbourne Summer Series in February and at Charleston in April.

The Australian is aiming to join Serena and Venus Williams as the only women in the past two decades to win consecutive Wimbledon and US Open titles.

“Wimbledon was a long time ago,” Barty said when asked if momentum from her title-winning run at the All England Club in July was helping her at the US Open.

“I mean, there is momentum in a sense of that was one of my greatest goals was to win that tournament. I think playing and understanding how to win Grand Slams is very unique. Two weeks is a long time to be focused and to be able to have a bit of luck, stay healthy. I’ve learnt that the hard way that sometimes it doesn’t always go your way.

“But also, it’s a different surface, a different tournament, completely different conditions. So it’s hard to take too much confidence or momentum from that event. For us, we just come here each and every day and try and do our best. That’s all we can do.”

Ajla Tomljanovic is enjoying a career-best run at the tournament, advancing to the third round for the first time with a 7-6(6) 6-4 win against No.30 seed Petra Martic today.

In men’s singles action, Jordan Thompson lost a five-set battle against Russian Aslan Karatsev. It was a heart-breaking loss for the 27-year-old Australian, who held a two-sets-to-love lead and also had two match points in the four-hour battle.

> READ: Thompson edged out in US Open battle