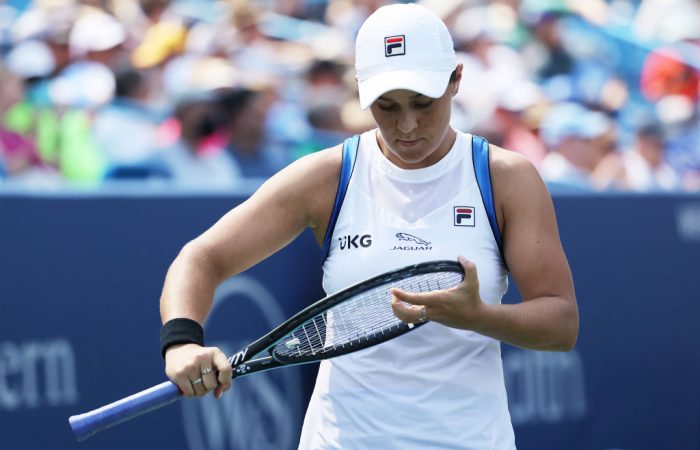 As Ash Barty successfully progressed to a second Grand Slam title at 2021 Wimbledon, there was one pleasing element of surprise for her long-time coach.

“I’ve always felt she was probably going to win either the Aussie or the US Open on a hard court (first),” said Craig Tyzzer. “I felt that some of her best tennis has been on hard courts and we probably play on it more and that’s probably why.”

Asked about her coach’s observation ahead of her sixth main draw campaign at Flushing Meadows, the world No.1 Australian gave a wry smile.

“Maybe that’s Tyzz’ just being a cheeky bugger, knowing that there are two hard-court Slams per year and only one on the other surfaces,” Barty laughed.

Still, it was hard to argue Tyzzer’s point. Years spent developing her natural talent on hard courts in Brisbane have served Barty superbly – especially in the most successful season of the Queenslander’s career.

Three of the world No.1’s tour-high five titles have been achieved on a hard-court, starting with a season-opening win at the Melbourne Summer Series and taking in the defence of her Miami title, which guaranteed Barty’s hold on world No.1.

Barty added to that hard-court record as she lifted her 13th singles trophy in Cincinnati, where she was the first Australian champion since Evonne Goolagong Cawley triumphed in 1973.

As she flawlessly overcame a trio of major champions – Victoria Azarenka, Barbora Krejickova and Angelique Kerber – before outclassing Jil Teichmann in the Cincinnati final, it was natural to ponder if Barty had set her sights on claiming a hard-court Slam.

“It’s not something that I’m focused on. I mean, I’m just trying to do the best that I can each and every match, each and every tournament,” the 25-year-old said.

“But yeah, we’re continuing to do the right things. We keep putting ourselves in the right position and that’s all we can ask.”

The laid-back approach is the perfect attitude as Barty navigates the most rewarding – yet most challenging – period of her professional life.

After leaving Australia in March, the famously home-loving No.1 has remained on tour for close to six months. Bolstered by deliveries of care packages (which include Vegemite, coffee beans, as well as artwork from her nieces and nephew), Barty has kept in daily contact with her family and friends.

While careful scheduling in the unusually long stint on tour has provided a successful formula, winning matches has also helped.

“I think just playing a lot of matches, you get that you get that busy feeling,” said Barty, who leads the tour with her 40-7 match-winning record in 2021.

“Not too many weeks have we been twiddling our thumbs and, and kind of trying to fill in time, which has been great.”

Overall physical and emotional wellbeing is nevertheless a priority for Barty and her astute team.

After winning the Tokyo Olympics mixed doubles bronze medal alongside John Peers, the Australian skipped the WTA event in Toronto and won her next tournament in Cincinnati.

“I think we’ve scheduled really well. We tried to prioritise big tournaments,” said Barty. “We want to play our best in certain events and being here in New York is no different to that.”

Barty’s first US Open challenge is in the opening round against Vera Zvonareva. Facing a former finalist – the 36-year-old Zvonareva, who recently returned to the tour as a mother, was runner-up to Kim Clijsters in 2010 – is the type of challenge that the world No.1 loves.

“(It’s) a match for me I know, I have to be ready straight away, which is great,” Barty related. “Someone who’s experienced, someone who’s played a lot of big matches, and is really comfortable in New York.”

But so too is Barty, who claimed the 2018 US Open doubles title with Coco Vandeweghe.

And while her best singles result so far is consecutive fourth-round appearances – Barty exiting to Karolina Pliskova in 2017 and Wang Qiang in 2018 – she has made massive gains in the years since.

“Each time we played here in New York, I felt like I played well,” reasoned the top seed, who takes important perspective into her 13th tournament of a busy year.

“There are certainly no guarantees in tennis and I know that a lot has happened in my career, the last 18 months, two years,” Barty added.

“And a lot has happened in the world the last few years as well. I think everyone’s in a bit of a different position than they were in August or September 2019, but (I am) looking forward to getting stuck in here.”