Seven Australians are in action on day two of the US Open in New York, headlined by world No.1 Ash Barty. 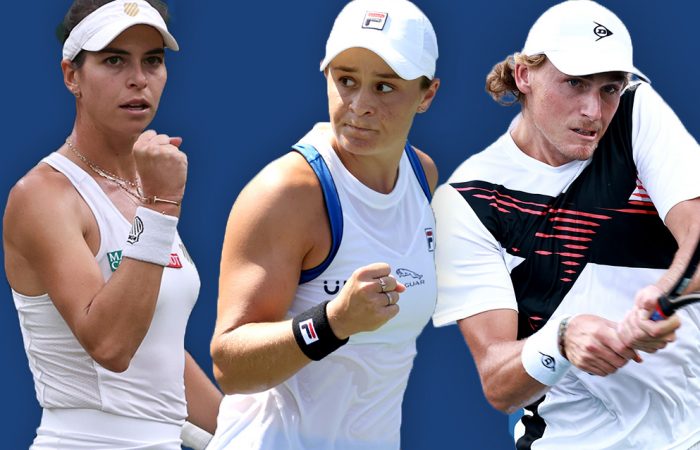 Australian tennis fans have lots of exciting matches to look forward to on day two of the US Open 2021 championships.

Seven Australian players are scheduled to play opening-round singles matches. This includes world No.1 Ash Barty, who is the first top-seeded Australian woman in New York in 51 years, and Sam Stosur, who is celebrating the 10-year anniversary of her major triumph at the tournament.

World No.17 Alex de Minaur begins his campaign too, while wildcards Storm Sanders and Max Purcell are set to make their main draw debuts.

Aussies in action on day two:

Ajla Tomljanovic (AUS) v [WC] Katie Volynets (USA)
Women’s singles, first round, Court 11, first match (from 1am AEST)
In her eighth US Open main draw appearance, Tomljanovic has her sights set on advancing beyond the second round for a first time. But first, the world No.46 needs to focus on beating wildcard Katie Volynets in the opening round. The 19-year-old American is ranked No.197 and contesting her third Grand Slam. Volynets has never previously beaten a top 50-ranked player, giving 28-year-old Tomljanovic a clear edge in experience. The No.2-ranked Australian woman can take confidence from her recent career-best Grand Slam run at Wimbledon too, where she reached the quarterfinals.
Head-to-head record: First career meeting

[1] Ash Barty (AUS) v Vera Zvonareva (RUS)
Women’s singles, first round, Arthur Ashe Stadium, day session, second match
World No.1 Barty begins her sixth US Open campaign against the experienced Zvonareva. The 36-year-old Russian has been ranked as high as No.2 and was a finalist in New York in 2010. However, Zvonareva has scored only a single top-10 win since returning to the tour in 2017 after maternity leave. Zvonareva makes her 12th main draw appearance as the world No.101 and against an opponent who has not lost in the first round at a major tournament in more than four years. The 25-year-old Barty has won 12 of her past 13 matches as well, which includes title-winning runs at Wimbledon and Cincinnati.
Head-to-head record: First career meeting

Jordan Thompson (AUS) v Gianluca Mager (ITA)
Men’s singles, first round, Court 15, second match
Making his sixth US Open main draw appearance, Thompson has a 3-2 career win-loss record in first-round matches at the tournament. After a career-best fourth-round run in New York last year, world No.59 Thompson has many reasons to be confident in his return. The 27-year-old, who has made four tour-level quarterfinals since June, plays Mager in the opening round. The 26-year-old Italian is ranked No.71 and has never previously won a US Open main draw match. However, their only previous meeting, during the Melbourne Summer Series earlier this year, proved a battle.
Head-to-head record: Thompson leads 1-0
Last meeting: Thompson won 4-6 6-4 6-3 (Melbourne 2021)

Sam Stosur (AUS) v [28] Anett Kontaveit (EST)
Women’s singles, first round, Court 7, third match
Making a remarkable 16th main draw appearance in New York, Stosur faces world No.28 Anett Kontaveit in the opening round. The 2011 champion has won seven of her 14 previous matches against a seeded opponent in New York. Although the 37-year-old Australian, who has an 8-7 career win-loss record in first-round matches at Flushing Meadows, is on an eight-match losing streak, valuable confidence and momentum was gained from a doubles title-winning run recently in Cincinnati. Kontaveit ended a five-match losing streak of her own to win the Cleveland singles title last week.
Head-to-head record: Kontaveit leads 1-0
Last meeting: Kontaveit won 1-6 6-2 6-4 (Dubai 2018)

[WC] Max Purcell (AUS) v [13] Jannik Sinner (ITA)
Men’s singles, first round, Court 10, third match
Purcell makes his US Open main draw debut against a familiar opponent. The 23-year-old Australian also faced Sinner in his Australian Open debut in 2020. Purcell has made giant improvements in his singles game in the past few months, with highlights including reaching a first ATP-level semifinal and breaking into the world’s top 200. Purcell has also scored two top-20 wins since June, highlighting he is not afraid to challenge the world’s best. World No.16 Sinner, a 20-year-old Italian looking to record his first main draw win in New York, should be wary of the rising Aussie wildcard.
Head-to-head record: Sinner leads 1-0
Last meeting: Sinner won 7-6(2) 6-2 6-4 (Australian Open 2020)

[WC] Storm Sanders (AUS) v Misaki Doi (JPN)
Women’s singles, first round, Court 13, fourth match
Sanders makes her US Open main draw debut against world No.97 Doi, a 30-year-old Japanese player and fellow left-hander who has been ranked as high as No.30. They have played once before – eight years ago, in one of Sanders’ first tour-level matches. The 27-year-old Australian is now a much more complete player and is enjoying an incredible breakthrough season. Sanders has improved her ranking more than 150 places since January to a career-high of No.132. This is her fifth Grand Slam main draw singles appearance and she is targeting a first win at this level.
Head-to-head record: Doi leads 1-0
Last meeting: Doi won 6-2 6-4 (Sydney 2013)

[14] Alex de Minaur (AUS) v Taylor Fritz (USA)
Men’s singles, first round, Louis Armstrong Stadium, night session, second match
World No.41 Fritz is one of the highest-ranked unseeded players in the draw, making this a challenging first-round match for De Minaur. However, 22-year-old Australian does have a winning record against the 23-year-old American, who has a career-high ranking of No.24 and was the US Open 2015 boys’ singles champion, and has not lost a set in their four previous matches. The world No.17 typically performs well in New York too, enjoying a career-best quarterfinal run last year. Although after being sidelined with COVID-19 last month, De Minaur begins the tournament short on match fitness.
Head-to-head record: De Minaur leads 4-0
Last meeting: De Minaur won 6-3 6-3 (Basel 2019)