Sanders and Barty beaten in doubles quarterfinals at Olympic Games 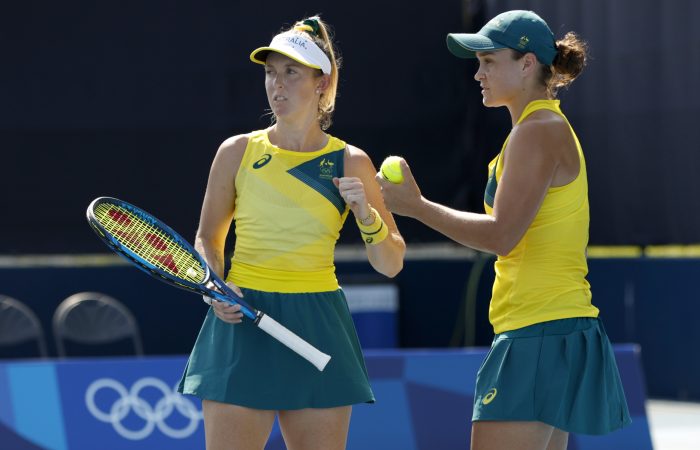 Storm Sanders and Ash Barty’s winning run in the women’s doubles competition at the Tokyo 2020 Olympic Games has ended in the quarterfinals.

The Czech pair, who are both 25, are among the world’s top-ranked doubles players – Krejcikova at No.2 and Siniakova at No.3.

Krejcikova and Siniakova have won three Grand Slam doubles titles together, including at Roland Garros this year, and entered this match with a season win-loss record of 26-7. They have a long history of competing together too, having claimed three consecutive Grand Slam girls’ doubles titles as a team in 2013.

Although Sanders and Barty are childhood friends as well, this is only the second time they have paired up during their professional careers. Their only previous tournament together was at ITF level in June 2016, where they made a grass-court semifinal at Eastbourne.

Yet it was the less-experienced Australians who took control of the match early, racing to a 4-1 lead and securing the opening set in 24 minutes.

The second set was tighter, with the Czechs proving why they are the top-seeded team. They secured the only break in the 10th game, winning Barty’s serve to level the match at one-set apiece.

The Czechs then built an 8-4 lead in the deciding match tiebreak – and despite the best efforts of the Australians to keep their medal hopes alive, Krejcikova and Siniakova closed out victory after 79 minutes on court.

Ellen Perez and Sam Stosur were also beaten in the quarterfinals today, with Swiss combination Belinda Bencic and Viktorija Golubic scoring a 6-4 6-4 win.

Since tennis was reintroduced as an official Olympic sport in 1988, only two Australian teams have advanced to the semifinals in the women’s doubles competition.

The last to do so were Rachel McQuillan and Nicole Bradtke in 1992.

Barty now turns her attention to the mixed doubles competition, where she is partnering John Peers.

The Australians defeated Horacio Zeballos and Nadia Podoroska from Argentina today in straight sets to progress to the quarterfinals.