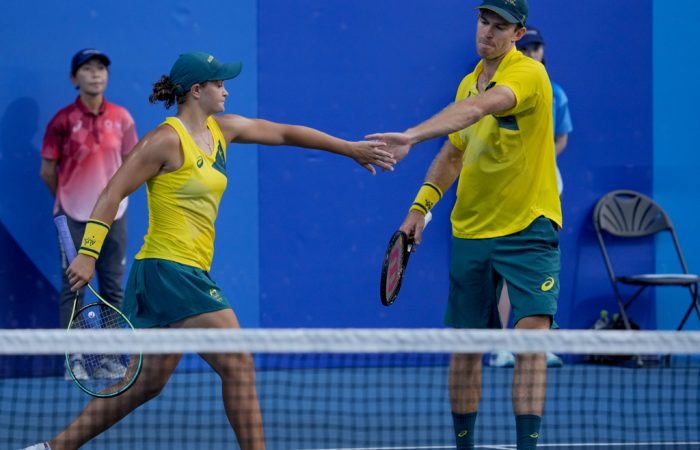 Always proud to wear the green and gold, Ash Barty and John Peers are relishing every moment of their Tokyo Olympics experience.

But the Australian pair were in a hurry as they booked their place in the mixed doubles quarterfinals.

The Australians will next face Greek No.2 seeds Stefanos Tsitsipas and Maria Sakkari – who would be right to be wary after Barty and Peers made an imperious start in Tokyo.

The Australians asserted authority from the outset as they built a 5-0 lead against Podoroska and Zeballos. Their opponents made it on the scoreboard, but Barty and Peers secured the opener in just 20 minutes.

While the second set started in similar style, Podoroska and Zeballos worked their way into the encounter. Recovering from a 1-3 deficit, the Argentines pushed it to a tiebreak where Barty and Peers held their nerve to claim a 7-3 victory.

It adds to some impressive performances from the Australian duo, who have built a 7-5 record in earlier mixed doubles tournaments. Their best results were quarterfinal appearances at 2013 Wimbledon and the 2014 US Open.

Barty and Peers, age 25 and 33 respectively, are teaming for the first time since the 2014 US Open. The top-ranked female and male doubles players for Australia (Barty at world No.36 and Peers at No.25) are each Grand Slam doubles champions.

Peers contested the men’s doubles draw with Max Purcell, the pair defeated in their opener.