Jordan Thompson is unable to convert set points as he exits to rising American Jenson Brooksby in the semifinals of the Hall of Fame Open in Newport. 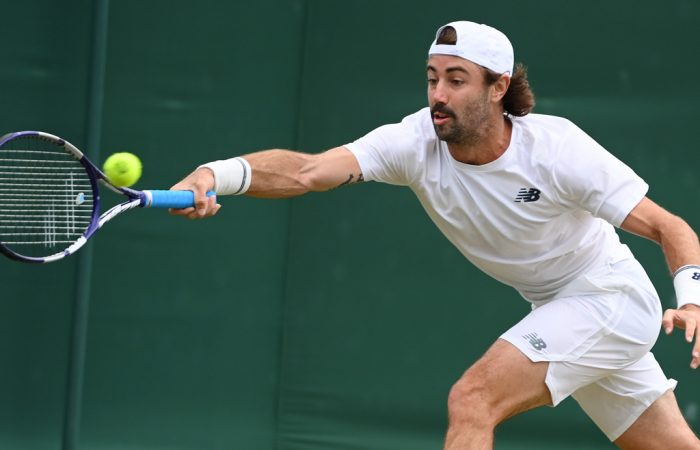 Jordan Thompson will turn his focus to the ATP 250 event in Los Cabos, Mexico, after his Hall of Fame campaign ended in the semifinals.

Enjoying a career breakthrough at the grass-court event, 20-year-old American Jenson Brooksby was a 6-3 7-6(3) winner over Thompson.

After dropping the first set, the seventh-seeded Thompson led 5-2 in the second and held two set points against Brooksby.

The world No.152 rallied to complete victory in just over two hours.

Thompson is seeded No.5 in Los Cabos, where he will face wildcard Ivo Karlovic in his opening match.

Australia’s Thanasi Kokkinakis was also granted a wildcard in Mexico and will face American Denis Kudla in the first round. Alex Bolt will face Italy’s Andreas Seppi.

Other Australian players in action this week are Marc Polmans, who faces a qualifier in the opening round of the ATP 250 event in Gstaad, Switzerland.

Sharma is the No.7 seed at the WTA 250 tournament and is drawn to meet local wildcard Lucrezia Stefanini in the first round.

Led by world No.1 Ash Barty, other Australian players have arrived in Japan as they prepare to contest singles and doubles events at the Tokyo Olympics.