Four Australians in action on day nine at Wimbledon

Four Australians are competing on day nine at Wimbledon, including Storm Sanders in the ladies' doubles quarterfinals. 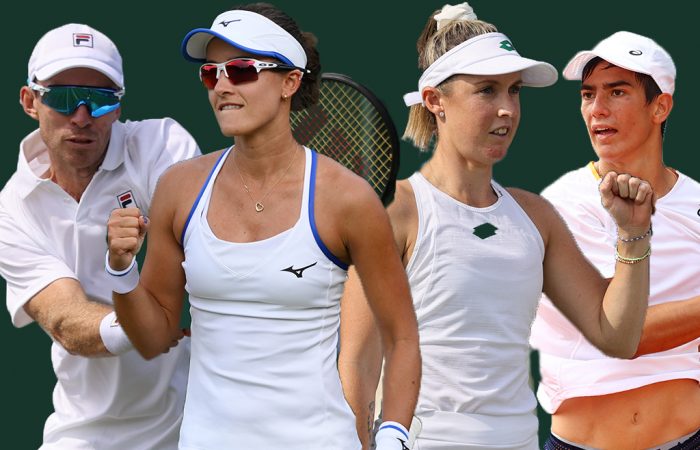 While world No.1 Ash Barty enjoys a rest day ahead of her Wimbledon singles semifinal showdown against former champion Angelique Kerber, we have four Aussies taking centre stage at the All England Club on day nine.

Storm Sanders is among them, with the 26-year-old looking to continue her career-best run in the ladies’ doubles draw. The world No.59, who entered this tournament with a career win-loss record of 4-15 in Grand Slam doubles matches and having never progressed beyond the second round, features in quarterfinal action today.

Sanders is aiming to become the first Australian woman in eight years to reach a Wimbledon doubles semifinal, an effort not matched since Ash Barty and Casey Dellacqua’s runner-up finish in 2013.

Storm Sanders (AUS)/Caroline Dolehide (USA) v [7] Hao-Ching Chan (TPE)/Latisha Chan (TPE)
Ladies’ doubles, quarterfinals, No.3 Court, second match
Yet to lose a set this tournament, the unseeded combination of Sanders and world No.40 Dolehide face a tough test in the quarterfinals. They play the No.21-ranked Chan sisters. Latisha Chan, a former world No.1 and four-time Grand Slam doubles champion, has matched her career-best ladies’ doubles result at the All England Club. While Hao-Ching Chan, who is four years younger at 27, is hoping to better a runner-up finish she recorded at Wimbledon in 2017.

Andrei Vasilevski (BLR)/Arina Rodionova (AUS) v [4] Edouard Roger-Vasselin (FRA)/Nicole Melichar (USA)
Mixed doubles, third round, No.3 Court, third match
Rodionova is enjoying a career-best Wimbledon mixed doubles run, advancing to the third round for the first time. The crafty 31-year-old, who lists grass as her favourite surface, is now aiming to reach her second career Grand Slam mixed doubles quarterfinal. The world No.82 also made the final eight at this year’s Australian Open. This delayed match resumes with the No.4 seeds leading 6-2 3-2.

[17] John Peers (AUS)/Zhang Shuai (CHN) v [6] Ivan Dodig (CRO)/Latisha Chan (TPE)
Mixed doubles, third round, Court 12, third match
In their third Wimbledon appearance as a team, world No.24 Peers and world No.48 Zhang have reached the third round for a second time. Now they have their sights set on advancing to a first quarterfinal. To get there, they need to defeat No.6 seeds and defending champions Dodig and Chan. The 32-year-old Peers has made a mixed doubles quarterfinal once before at Wimbledon, in 2013 alongside a teenage Ash Barty.

Philip Sekulic (AUS) v [8] Sean Cuenin (FRA)
Boys’ singles, first round, Court 6, first match (from 8pm AEST)
Draws have not been kind to 17-year-old Sekulic in his junior Grand Slam career. The Queensland teen, who made the third round as a qualifier at an ITF junior tournament last week, faced the No.1 seed at Roland Garros last month and plays the No.8 seed in his Wimbledon debut. Cuenin, a 17-year-old ranked No.12, was a boys’ singles semifinals at Roland Garros. This delayed match resumes with Cuenin leading 4-3 in the first set.

Philip Sekulic (AUS)/Orel Kimhi (ISR) v [1] Jack Pinnington Jones (GBR)/Shang Juncheng (CHN)
Boys’ doubles, first round, Court 17, fourth match
Queensland teen Sekulic, who is ranked No.72, is making his Wimbledon doubles debut partnering Kimhi, a 17-year-old from Israel ranked No.77. The combination, who played their first tournament together last week, face the top seeds in the opening round. Pinnington Jones, an 18-year-old Brit, is ranked No.8 and 16-year-old Shang is the world No.2 ranked junior boy.