Ajla Tomljanovic will face world No.1 Ash Barty in the first all-Australian ladies' singles quarterfinal at The Championships in 41 years. 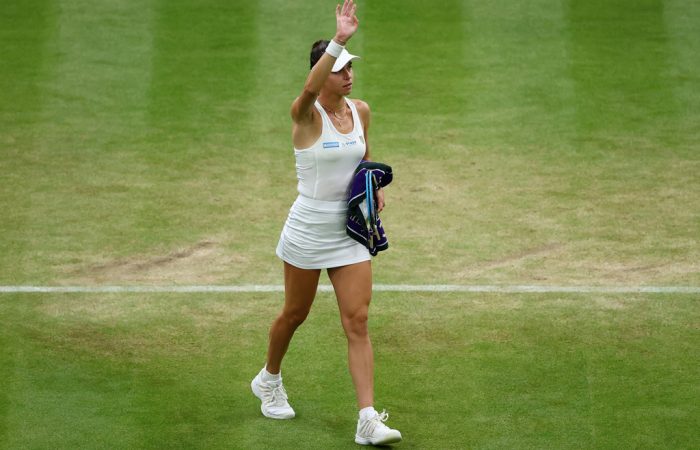 Tomljanovic progressed 6-4 3-0 after the 18-year-old wildcard was forced to retire in the second set with injury.

It set ups a tantalising all-Australian quarterfinal with world No.1 Ash Barty, marking the first time that two Australian women will meet at that stage of The Championships since Evonne Goolagong Cawley defeated Wendy Turnbull on her way to winning the 1980 title.

Facing a local who had lit up the 2021 Championships with a trio of wins over higher-ranked opponents, Tomljanovic initially required all her experience in her first fourth-round appearance at a major since 2014.

Raducanu was contesting only her second professional event but showed a maturity far beyond her 18 years as she drew on the crowd support and held her nerve against the big-hitting Australian.

She defended a break point in her opening service game and subsequently held three break points over Tomljanovic in the 50-miute first set.

But the more experienced Australian piled on the pressure when it most factored – after a nine-minute 10th game, a first break of serve also delivered Tomljanovic with a 6-4 lead.

It proved a final push for the spirited teenager, who was broken in the opening game of the second set. She held a pair of break points as Tomljanovic worked hard to consolidate, but retired after the following game.

“I’m really sorry for her because I wish we could have finished it but it’s sport, it happens. I’m only wishing her all the best,” said Tomljanovic, admitting she was disappointed with the abrupt end after she and Raducanu had worked their way into a quality match.

“I think the beginning was really nervous from both sides, but I think towards the end of that first set we started playing some really good tennis and I felt like I found my groove.

“In the second set I felt like I was playing well but then, you know, if Emma was hurt and wasn’t at her best it now kind of explains it.”

While noting that “it didn’t really sink in that I’m in the quarter(finals), just because of the circumstances”, Tomljanovic is delighted to face her countrywoman for a place in a Wimbledon semifinal.

“I’m thrilled to play Ash,” said a smiling Tomljanovic. “I’m hoping that it will be a great match.”