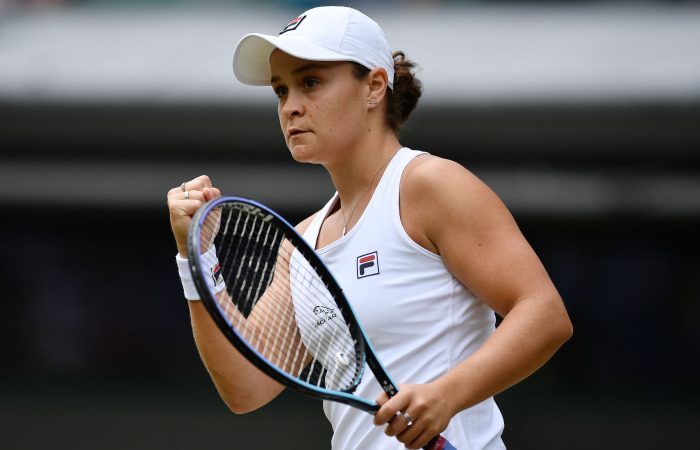 Ash Barty has produced her best performance of the tournament so far to book her place in the Wimbledon quarterfinals.

The world No.1 posted a 7-5 6-3 victory against Czech Barbora Krejcikova in fourth-round action at the All England Club today, snapping the recently-crowned Roland Garros champion’s 15-match winning streak.

“It was an incredibly tough match, Barbora’s had an incredible year. Honestly, she’s been one of the toughest players to beat and I was excited for the challenge today,” Barty said.

World No.17 Krejcikova made a confident start, breaking the top-seeded Australian’s serve in the third game and building a 4-2 advantage. But a resilient Barty recovered to reel off three consecutive games.

“Probably for the first 15 or 20 minutes, I felt like I was really struggling to pick up her ball off her racquet,” Barty said. “I wasn’t able to make enough, give myself a chance to get into games, plain and simple.

“Once I was able to do that, getting a break back instantly at 4-3 to level things out was a good game. Again, made more balls and gave myself a chance. It was just about giving myself time to settle into the match in a sense of feeling super free and super comfortable, just working my way into games.”

Although the 25-year-old from Queensland was unable to convert a set point in the ninth game, she won a run of eight straight points to secure the opening set in 47 minutes.

Krejcikova, the world No.1-ranked doubles player, steadied early in the second set and had two break point opportunities on Barty’s serve in the third game. But from 15-40, Barty won four consecutive points to hold.

For every challenge Krejickova made, Barty found an answer.

“I felt like I found some pretty good stuff when I needed it most, which is great,” Barty said.

She demonstrated this again in the final game of the match, recovering from 0-30 and saving a break point to seal victory with her sixth ace after 95 minutes on court.

In a showdown between two players with exceptional all-court craft, it was Barty who had the most options. She finished the match with 21 winners to Krejcikova’s 19, won 78 per cent of net points and saved 80 per cent of the break points she faced.

Barty becomes the 10th Australian woman in the Open era to advance to a singles quarterfinal at Wimbledon and the first since Jelena Dokic’s semifinal run in 2000.

It is the first all-Australian ladies’ singles quarterfinal at the All England Club since Evonne Goolagong Cawley defeated Wendy Turnbull during her title-winning run in 1980.

“I love coming out here and testing myself against the best in the world,” Barty said. “There’s certainly no place I’d rather be at the moment.”