An abdominal injury has forced Australia's Nick Kyrgios to retire mid-match in his third-round showdown with No.16 seed Felix Auger-Aliassime. 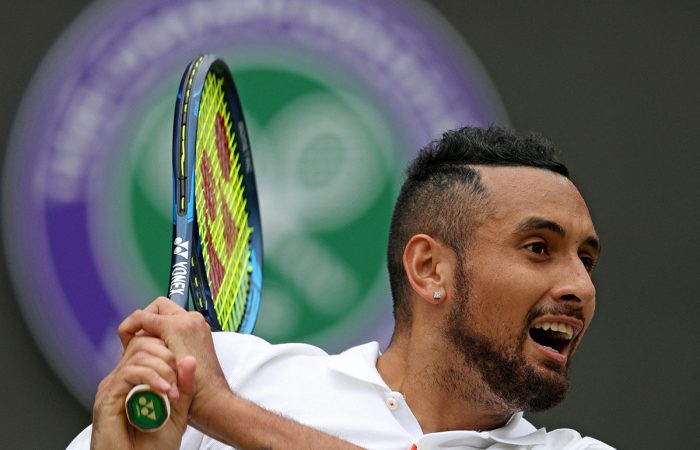 Nick Kyrgios has made a painful exit from Wimbledon, with an abdominal injury spoiling his chances in the third round.

The 26-year-old Australian retired during his clash against No.16 seed Felix Auger-Aliassime with the match locked at one-set apiece.

“I felt my ab, I definitely did something to it towards the end of the first set,” Kyrgios said.

“That’s the way it goes … I tried to play as long as I could and I’m sorry I couldn’t give you more today.”

Rest up, @NickKyrgios – look forward to having you back next year 👊#Wimbledon pic.twitter.com/WURhj58ErR

It wasn’t Kyrgios’ day in many ways. There was a delayed start to the third-round match at No.1 Court, with officials rushing back to the locker-room to collect the Australian’s missing shoes.

Kyrgios, however, was unfazed about forgetting to take his shoes on court. Instead, it was 20-year-old Auger-Aliassime who was rattled early in the match.

The world No.60-ranked Australian raced to a 4-1 lead with a double break. Kyrgios hit five winners and committed only a single unforced error in the opening five games. In comparison, Auger-Aliassime tallied three winners and seven unforced errors.

After trading breaks in the next two games, Kyrgios took a medical time out while leading 5-2.

“I felt it specifically 4-1, 15-all,” Kyrgios said of his abdominal strain. “I hit a first serve and I felt a strain towards my left abdominal. I’ve had that injury before playing juniors. When the load spikes up, the body’s not used to playing the load, it can cause some issues.

“It’s funny because I woke up today feeling phenomenal. My hips felt good, my body felt good. I was like, ‘Wow, I’m back, I’m feeling good’. The luck just didn’t go my way.”

He managed to serve out the opening set, sealing it in 35 minutes. But a wincing Kyrgios could not hide his injury concern.

He retired at the completion of the second set, telling his opponent he could not continue as it was too painful to serve.

“I haven’t played this level of tennis in a long time and obviously playing someone as good as Felix, I want my main weapon, my serve, to be firing on all cylinders,” Kyrgios conceded.

Kyrgios is determined to recover quickly, noting the positive experiences in his tour return this week had reignited his love of competing.

“Playing out here and having this support, has made me have a second wind. I reckon I’m going to come back and play for a bit longer,” he said.

Duckworth, Thompson exit in third round

Although the 29-year-old Australian fought gallantly in the one-hour and 47-minute clash, Sonego proved to have too much firepower. The No.23 seed served 13 aces and struck 31 winners.

Duckworth, who finished with 14 winners and a costly 24 unforced errors, can still take many positives from his performance this week. Making a 25th Grand Slam main draw appearance, the world No.91 advanced to the third round for a first time and is now projected to return to the world’s top 80.

Jordan Thompson’s winning run is also over, with Belarusian Ilya Ivashka scoring a 6-4 6-4 6-4 win in their third-round meeting.

The 27-year-old Australian has been impressive form this tournament, overcoming world No.14 Casper Ruud in a five-set first-round battle and then beating former world No.4 Kei Nishikori in the second round. It was the world No.78’s career-best run at Wimbledon, where he had never previously won a main draw match.

But after making a flat start today, Thompson struggled to quell the building momentum of world No.79 Ivashka.

The 193-centimetre Ivashka, who becomes the first Belarusian man to reach a Grand Slam fourth round in 15 years, had an answer to every challenge from Thompson in their two-hour match.